Record-breaking athlete and award-winning pianist gearing up for HaLOOween 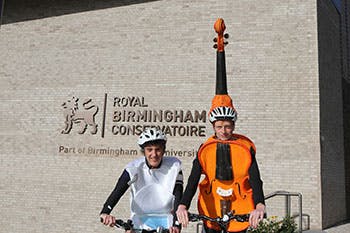 As people across the world prepare their costumes for Halloween, a record-breaking athlete and an award-winning pianist from Birmingham City University’s Royal Birmingham Conservatoire have teamed up for a unique fancy dress cycling fundraising challenge

Research Assistant Alistair Rutherford and Keyboard Tutor Anthony Hewitt are planning to cycle 180 miles – from Royal Birmingham Conservatoire in the UK to Rotterdam in the Netherlands – dressed as a human-sized viola and a toilet respectively.

The duo plan to arrive in Rotterdam for the start of the 45th International Viola Congress, which takes place in the Dutch city from Tuesday 20 until Saturday 24 November.

Alistair Rutherford is better known as The Running Viola, and has secured two world records, running both the fastest marathon and half marathon while dressed as a musical instrument. Despite retiring his alter ego a year ago, the violist has now taken up cycling with colleague Hewitt and is taking his iconic costume internationally for the first time.

As well as planning to arrive at the Congress in style, Rutherford and Hewitt are hoping their cycling challenge will raise funds for the collaborative UK-South African project, Cape Gate MIAGI Centre for Music & Birmingham Conservatoire – or ARCO, which is also the name for the technique of playing a stringed instrument with a bow.

“After just a little over one year in retirement, it seemed only logical to bring The Running Viola out of hiding in its new, evolved form – The Cycling Viola – for this unique challenge. Like its predecessor, the idea was first mooted in the pub and I’ll be using the original costume, albeit slightly smaller and a little more aerodynamic.

Although we’re not aiming for a Guinness World Record this time, the fundraiser will see us cycling 180 miles in November as a viola and toilet, which will be a pretty special sight for spectators along the route and hopefully help raise awareness and funds for the important cause we are supporting.
Alistair Rutherford, Research Assistant and alumnus, Royal Birmingham Conservatoire

Renowned classical pianist Anthony Hewitt has already raised thousands for charity under the moniker, The Olympianist. Five years ago he cycled the length of Britain with his piano, giving a recital at the end of each gruelling leg. On Friday 3 March 2017, he cycled through the night from Barnes, London to Birmingham Town Hall, before treating the audience to a performance of Maurice Ravel’s ‘Gaspard de la Nuit’.

Hewitt’s costume for the upcoming ride – a toilet – is a tribute to a character that is flushed down the lavatory for their terrible viola performance in the play ‘Die Bratschenfimmel’ (‘Viola Mania’) by Paul Hindemith, which Conservatoire students will be showcasing at the Congress. Elsewhere, Royal Birmingham Conservatoire students will perform Sergei Prokofiev’s ‘Romeo and Juliet’ in Rotterdam.

ARCO is an innovative alliance which has seen 24 strings students aged between eight and 17 in South Africa selected to participate in weekly instrumental Skype lessons, given by academics, current students and alumni of Royal Birmingham Conservatoire.

ARCO aims to provide the benefits and life changing inspiration of music to children in the most deprived of circumstances. As well as providing transformative music education activities, Conservatoire staff and students – including Alistair Rutherford – have been acting as role models for vulnerable youngsters living in Soweto, a Johannesburg township deeply affected by poverty and crime. 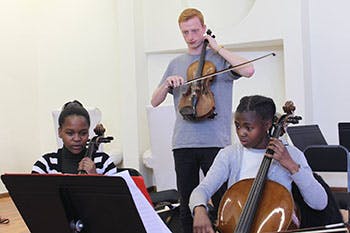 Money raised by The Cycling Viola and The Olympianist will help provide much-needed technology for the students in South Africa – including new microphones – complimenting Royal Birmingham Conservatoire’s Distance Learning Hub in Birmingham.

“ARCO is an amazing and unique project, which greatly enriches the lives of many young people, not just now, but for their whole life. Anything we can do in order to bring awareness to their cause is worth all the effort – and buffoonery!

I’ve never dressed up as a toilet before – I’m sure it’ll be the last occasion! Let’s say I’m doing this for ‘a lav’, and it will be good for my ‘waste’ line – I’ve got nothing ‘two loos’!
Anthony Hewitt, Keyboard Tutor, Royal Birmingham Conservatoire

Rutherford and Hewitt will begin their journey on Monday 18 November, cycling 100 miles to Cambridge. The next day will see them travel a further 60 miles to Harwich, before they catch the night ferry to the Hook of Holland. The remaining 20 miles will be cycled on Wednesday 20 November when the duo reach the 45th International Viola Congress’ Opening Ceremony in Rotterdam’s Hofpleintheater.

International Viola Congresses have been held annually since 1973 and have assisted in promoting the ever-increasing standards of excellence in viola performance and research.

Those wishing to support The Cycling Viola and The Olympianist in their challenge can do so via their JustGiving page.