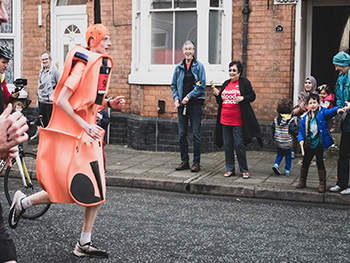 A student from Birmingham City University’s Royal Birmingham Conservatoire has once again mixed his love of both music and athletics to break another Guinness World Record; running the fastest marathon dressed as a musical instrument.

Donning a custom-made viola costume, Alistair Rutherford – a.k.a. The Running Viola – ran the Birmingham International Marathon on Sunday 15 October with a time of three hours, 20 minutes and 33 seconds – comfortably beating the previous record by almost an hour (53 minutes and 45 seconds). This achievement comes after Alistair broke the half marathon record earlier this year.

Created by Merseyside-based designer Brian D Hanlon, Alistair’s outfit is made from lightweight Plastazote foam and comes complete with a striking headpiece that mimics the shape of the viola’s neck and pegbox.

Meanwhile, fellow students at the Royal Birmingham Conservatoire were serenading Alistair and the thousands taking part in the marathon – and half marathon – from the sidelines, performing two world premieres specially commissioned for the occasion. The brass dectet and a massed viola work were arranged by Dr. Joe Cutler, Head of Composition, and the Composition Department at the Conservatoire

Alistair Rutherford hopes to raise at least £4,000 for the collaborative UK-South African project, Cape Gate MIAGI Centre for Music & Birmingham Conservatoire – or ARCO, which is also the name for the technique of playing a stringed instrument with a bow.

ARCO has seen 24 strings students aged between eight and 17 in South Africa selected to participate in weekly instrumental Skype lessons, given by academics, current students and alumni of Royal Birmingham Conservatoire, part of Birmingham City University.

In fact, funds raised from his world record attempt will enable his pupil, Njabulo Nxumalo, aged 17, to fly over to the UK next month, along with Kwanda Buthelezi, aged 13, and Mbali Phato, aged 12, and perform in the ARCO Concert on Saturday 18 November as part of the second Cecil Aronowitz Viola Competition at the Royal Birmingham Conservatoire. Meanwhile, Alistair’s marathon journey was streamed live to the ARCO youngsters, so they could cheer him on from the other side of the world.

“I cannot thank everyone enough at the Royal Birmingham Conserivatoire and ARCO, along with my family and friends, for their unwavering support throughout this challenge. Running the Birmingham International Marathon wasn’t easy, particularly in my costume, but it was great to have them cheering me on along the route – whether in person or virtually – as well as the people of Birmingham, who came out in force to support all the runners.”

“I am planning on resting The Running Viola for the moment, unless someone breaks my records! I’m looking forward to my work coming to frutition though, when my ARCO student comes to Birmingham in November.”

Running the Birmingham International Marathon is just one of several fundraising events the postgraduate student has organised in aid of ARCO. Last year, the violist ran the equivalent distance of the length of South Africa’s coastline, clocking up 1,739 miles (2798 kilometres) by the time he flew out to Johannesburg for the first ARCO Festival, where Conservatoire students and staff met and performed with their students in person for the first time. 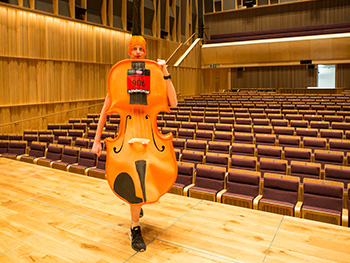 Meanwhile, earlier this year, he ran the Liverpool Half Marathon, the Wirral Half Marathon and the Simplyhealth Great Birmingham 10K, all in his viola costume.

Louise Lansdown, Head of Strings at the Royal Birmingham Conservatoire, initiated the ARCO project in 2015. She said:

“Alistair Rutherford’s energy, passion and unswerving commitment to the ARCO project, for which he is fundraising, is an example to us all. Everyone at the Royal Birmingham Conservatoire could not be prouder of Alistair and his incredible achievements.”

Support for Alistair’s challenge has been bolstered with his own personalised ‘mini me’ mascot; a knitted doll created by Joyce Peacock from Kirkby in Liverpool. Since February 2015, Joyce has knitted 375 ‘running dolls’ for good causes and currently has more than 50 on order. Interestingly, Joyce’s creation is 16.5 inches tall, exactly the same length as Alistair’s real life viola made by German luthier Bernd Hiller.

Alistair has been further supported by his athletics club, Birmingham-based Birchfield Harriers. One of the most successful athletics clubs in Britain – having being represented at every single Olympic Games bar one since 1908 – they became the first club in history to win both the men’s and women’s Premier League titles last year. Alistair is trained by Senior Men’s Distance Coach, Dave Lawrence and in August this year, The Running Viola competed in the 5,000 metres at the British Athletics League Premiership, where the Senior Men’s Team won for the third time in a row.

Birchfield Harriers are based at Birmingham’s Alexander Stadium which is in the running to be the host venue for the 2022 Commonwealth Games and where the city’s marathon will commence.

You can support Alistair’s world record attempt via his JustGiving page. You can also watch videos of Alistair training in his costume.