Lloyd Webber gets ‘diggy with it’ 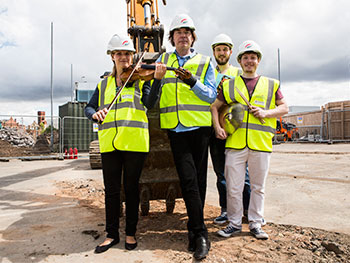 Globally renowned musician Julian Lloyd Webber swapped his cello for a shovel this week when he put the first spade in the ground on the development of a new home for Birmingham Conservatoire, part of Birmingham City University.

Professor Lloyd Webber, the newly appointed Principal of the Birmingham Conservatoire, joined fellow university staff and partners to celebrate the start of building work at the site.

More about the new Conservatoire

The £56 million project, the UK's first new conservatoire in a generation, will open for teaching and performances in September 2017. Designed by Feilden Clegg Bradley studios, it will house a 496-seat auditorium, two additional performance spaces and a range of teaching facilities.

Located on Birmingham City University's fast developing city centre campus, Conservatoire students will have ready access to media and production facilities, including one of the largest green screen studios in the UK.

The opportunities that lie ahead for Birmingham Conservatoire are limitless. We will have an exceptional new home for making music as well as access to the University's facilities and multi-genre expertise, ensuring our students leave with all the skills they need for today's music industry.

Christine Abbott, University Secretary and Director of Operations said: "We're extremely proud to be building what will be the first purpose built conservatoire in the UK since 1987. As well as providing world class facilities for our students, the fantastic new facility offers us the opportunity to showcase what the conservatoire has to offer, even more so than we have ever done before."