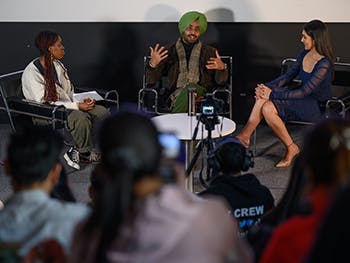 Following a tour of the £57m state-of-the-art Royal Birmingham Conservatoire with Interim Principal Dr Shirley Thompson, the Sufi superstar took part in a special Q&A session with staff and students from the Conservatoire and School of Media along with guests from across the University and the worlds of politics, banking and music.

Released to accompany new song ‘Naadan Jehi Aas’, the first-ever music video to be filmed at Royal Albert Hall in its 150-year history features the British-Indian model and Vitiligo awareness campaigner Jasroop Singh and has amassed over 1.5million views since its release on Friday 25 February.

Corinne Stewart, in her second year of a three-year music industries degree at Birmingham School of Media, said, "Meeting Satinder Sartaaj was a surreal and inspiring experience. Someone at his level of stardom was so humble and gracious when answering my questions which made me feel extremely comfortable as this was my first in-person interview.

Satinder’s in-depth answers to my questions really helped me to understand him and how he works as a musician, and you can tell he really cares about the songs and poetry he produces. Satinder inspired me to really hone my journalistic work and write about topics I am passionate about. His new song ‘Nadan Jehi Aas’ which embraces all types of beauty and raises awareness of the skin condition, Vitiligo, will really resonate with people

Satinder Sartaaj earned a five-year vocal and instrumental diploma at Sangeet Vishard in Jalandhar. Satinder then moved to Chandigarh to pursue his Masters in Musical and M.Phil. as well as a PhD in Sufi music at Punjab University.

After teaching for a number of years, Sartaaj began a career as a singer, songwriter and poet, making a name for himself in the Punjabi music and film industries. He has contributed vocals for a number of Bollywood films and made his screen debut as Maharaja Duleep Singh in 'The Black Prince' in 2017.

His collaborations with Nelly Furtado, Talib Kweli, and other American music stars combined with his collaboration with Indian cinema queen Shabana Azmi in film have helped propel the performer to stardom.

Sartaaj’s achievements with the United Nations to help raise funds for their fight against Human Trafficking saw him work alongside cultural royalty like A.R.Rahman, Sonu Nigam, Quincy Jones, and President Jimmy Carter.

The artist has long-established links with Birmingham, having released music through city bhangra music label Moviebox, and promotion via Brit Asia TV.

Inspiring the Next Generation: Rachel Roberts