Life is full of surprises; my anticipated peaceful summer turned into a six-week orchestral tour around Europe with the MIAGI orchestra from South Africa, to celebrate the centenary of Nelson Mandela’s birth.

MIAGI stands for ‘music is a great investment’, and the group’s aims resonate with Mandela’s desire for cultural strength within a ‘rainbow’ society. So, as part of the ‘Mandela 100’ international celebrations, I got to play in some of Europe’s top concert halls and festivals, together with some fellow Birmingham students and alumni.

We joined MIAGI for a short-intensive rehearsal period in the quaint German town of Schlitz, which included a crash course in singing in Zulu (clicks included!), playing the Kudu Horn and pipes, and attempting to dance. With preparations complete, we departed for Hamburg to play the first official concert of the tour at the newly opened Elbphilarmonie concert hall!

The Elbphilharmonie is a visual and acoustical wonder; the building towers high above the cityscape, and its dominant location on the waterfront helps make it a real statement building as a cultural centre. After going through all the backstage area (which featured a special viola room!) we walked on stage. 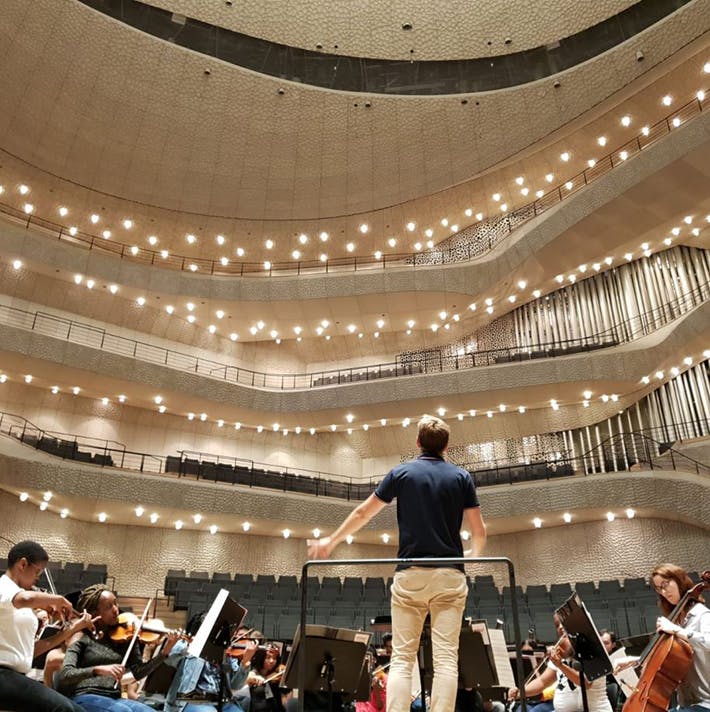 The hall is stunningly beautiful, however I couldn’t shake the impression that the architect had perhaps drawn some influence from The Flintstones. Gorgeous smooth sand coloured stone filled the walls, small bright white lights peppered the walls, the audience didn’t expand that far away from the performance area but instead rose upward dramatically, the result being an intimate atmosphere despite the large size.

The acoustic felt very ‘clean’. It was bright and there was a wonderful clarity, however every single aspect of the sound was projected, so if the attack of a note was too hard somewhere individually then it really affected the overall sound. This challenge was compounded by the large stage, and also, I found that I had play down much more than usual just to be able to hear what was going on in the distance.

The concert began with a traditional western programme: Beethoven’s Egmont Overture and Stravinsky’s Firebird Suite. The audience was warned in the introduction to the concert to get a good drink in the interval, as the second half would be a real party – and sure enough, they were soon fully immersed, with the orchestra showcasing African music and culture. As to how it was received, well – see for yourself.

Our next leg in Brussels, started with a Mandela commemoration event where the South African ambassador spoke about Mandela, and the orchestra got up and sang the national anthem (which contains four different languages). The next day we visited the EU parliament to put on a small concert, this also gave a fascinating opportunity to see the EU parliament chamber. Following a later performance in The Bozar concert hall, we departed for our next stop in northern Italy.

After a gruelling coach journey lasting over a day, we arrived in Toblach at 1am. After crawling out of the bed the next morning we emerged onto what appeared to be the set for The Sound of Music, gorgeous mountainscapes with expansive woodland and crystal blue rivers and lakes. 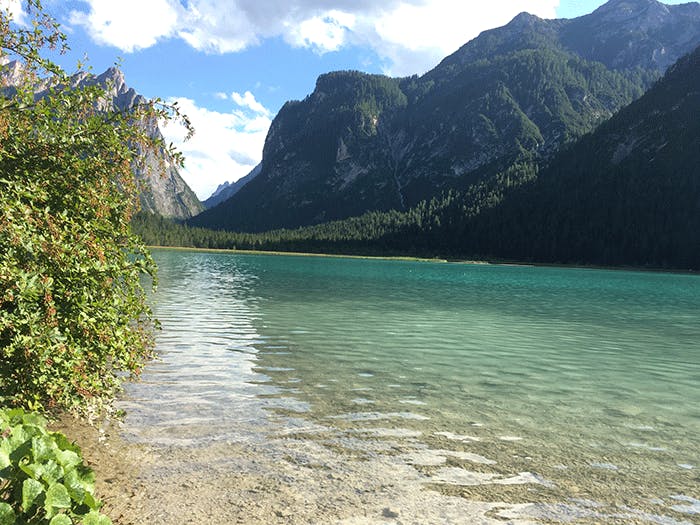 Maria and I managed to visit Gustav Mahler’s cabin, where he resided during some of the composition of his last two symphonies. Unfortunately, the museum was closed, but the bar was open, so we raised an Aperol spritz (or two) to the man himself, in absentia.

Our concert was particularly exciting because it was the opening concert of the Gustav Mahler Festival, with a change in the programme to include Benjamin Britten’s orchestration of the second movement of Mahler’s third symphony entitled ‘What the Wild Flowers Tell Me’. An excerpt of the Mahler/Britten can be heard here.

An interesting condition of orchestras being allowed to play at this festival is involvement with the local community; for us achieved through a host-family scheme, where some members of the orchestra stayed with local residents of Ludwisburg for the duration of the stay. For a relatively small town, the concert hall was wonderfully visually impressive, with a huge stage seating a few thousand. The audience was very positive and receptive, and we got to meet and greet the locals in a touching reception afterwards. We passed through Villach, Austria for another concert before heading to…

Perhaps only in Germany would you find a giant classical music festival taking place in the middle of nowhere. Halfing is a beautiful location, with sparse rustic houses and expansive woodland. The Immling festival was set up 22 years ago by Ludwig Baumann, and has built up quite the following during this time – boasting large-scale opera productions and a diverse line-up. The huge wooden concert stage and impressive festival tents around the site complimented the rustic, idyllic feel of Halfing, where the festival was based. This was a refreshingly different experience, in complete contrast to our next stop at the…

Following the previous intensity of traveling and concerts, we were granted a week off in Switzerland to enjoy the Verbier festival and relax. In exchange for putting on some concerts and educational workshops, we were granted all-access passes to the festival. Relaxing, of course, meant, for Maria, Emily and myself, getting to every single masterclass/concert/lecture that we could. Highlights included seeing the amazing student orchestras within the festival, watching Tabea Zimmermann and Vilde Frang perform Mozart’s Sinfonia Concertante, and observing a number of masterclasses by high-profile musicians including Pinchas Zukerman and Tabea Zimermmann.

This wonderful week was topped by the announcement that MIAGI had been awarded the European cultural prize; previous recipients include Simon Rattle and the European Union Youth Orchestra.

Our penultimate stop on the tour was the beautiful city of Amsterdam, with a rare opportunity to play at the Royal Concertgebouw.

Having seen the inside of the Royal Concertgebouw on film, I thought the outside, though nice, seemed a little unassuming. This is perhaps because over the road are the grand Rijksmuseum and the Van Gogh Museum, both impressive buildings in their own right. Fortunately, the inside was as breathtaking as one might hope, and as for the acoustic… wow! 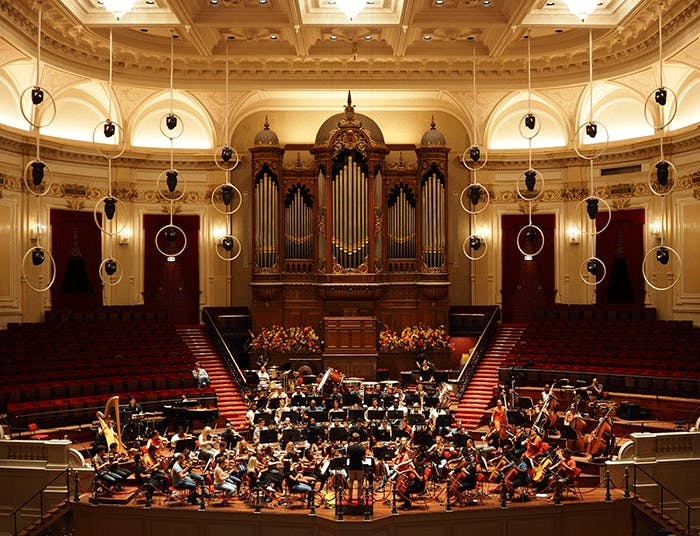 The acoustic differed so considerably from the modern setting of The Elbphilharmonie due to its warmth and roundness – everything sounded full, there was no need to work hard at all, and although there was great clarity, the closeness of the smaller stage meant that one never felt uncomfortable playing in there. The concert was an overwhelming success, and in my opinion, it was our best performance of the Firebird Suite. After not very much sleep at all, we departed for our final stop of the tour – Berlin.

Our time in Berlin was limited to just two days, so it was fortunate our hotel was conveniently near to the Brandenburg Gate, Reichstag, German Parliament, and - our concert venue - the Berlin Konzerthaus. The inside of the Konzerthaus was particularly grand and offered a wonderful acoustic – though personally I preferred that of the Concertgebouw.

We played two shows: one for a private audience consisting of members of the German parliament; the second to open the Young Euro Classic festival. A personal highlight for me was the drinks reception after the first concert, in which two of the jazz-musicians from the orchestra started playing a spontaneous set, and then gradually more and more joined in until eventually it was a full band. After the final concert we partied and said our emotional good-byes.

The MIAGI Mandela Centenary tour provided an undoubtedly great musical experience, as one would have expected, but the chance to get to know MIAGI and the members of their orchestra, to be encouraged to stand, dance and sing within an orchestra, to get closer to African music and culture, to interact with great international performers, and finally to have been part of the Mandela celebrations made this a truly unique and privileged experience. 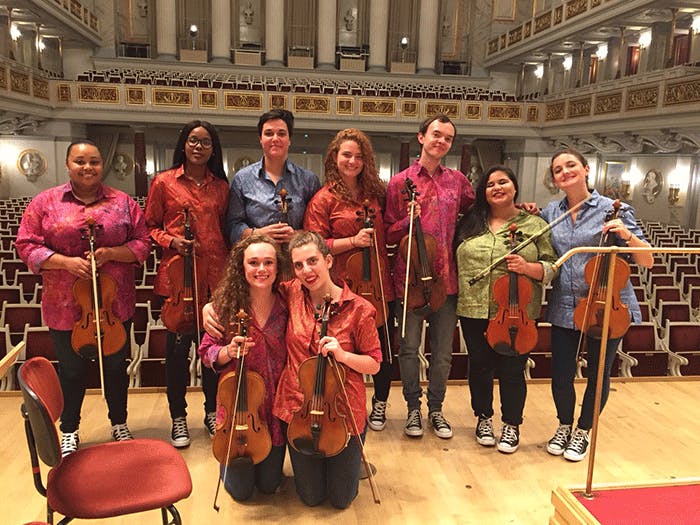 Find out more about our Music Departments

From Junior Conservatoire to touring the world: Elaine Ackers intervie...

Inspiring the Next Generation: Benjamin Hill