Previous to her role as Course Director of MA Acting at Royal Birmingham Conservatoire, Lise trained actors for a decade at the Liverpool Institute for Performing Arts (LIPA). 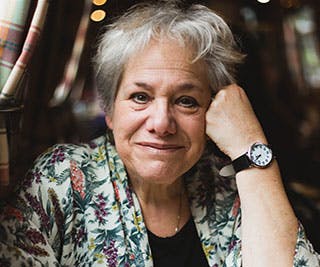 An American ex-pat, in addition to her many professional directing credits in the USA Lise has taught at The North Carolina School of the Arts, Pacific Lutheran University, and was Head of Voice at both Duke University and Purdue University.

The recipient of directing awards in both the US and UK, she was a founding director of Seattle’s first small specialist musical theatre company. Her theatre credits include West End productions and theatres across the UK, including other drama schools. She has also been directing productions at Royal Birmingham Conservatoire for 11 years.

She is an acknowledged international specialist in the areas of Vocal Violence and Acting through Song.

She most recently contributed VOX FEMINA PUBLICA to the book Amending Speech: Women's Voices in Parliament, 1918-2018. She also presented at ‘Women in Parliament’ in celebration of the Representation of People Act in 2018.

Lise on the course:

“Postgraduate level acting at the Royal Birmingham Conservatoire (RBC) is an intense industry-led course. Many of our graduates have embarked on exciting ventures including West End, International tours, Panto, Regional theatre and Television in both the UK and USA.

You will have opportunity to create a solo performance, radio/screen acting and audiobook training in addition to the Federation of Drama Schools guidelines for training. Our staff are made up off senior tutors from the RBC acting team and visiting and specialist lecturers who are also professional practitioners.”

Find out more about our Department of Acting

How networking whilst studying can lead to a choice of industry opport...

My first year experience at RBC