Alumna lands role in upcoming movie Time Is Up 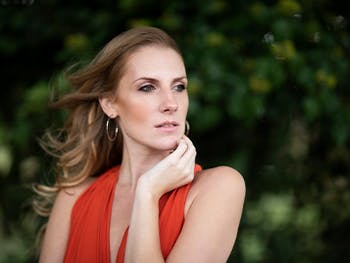 An Acting alumna is getting ready to see herself on the big screen in ‘Time Is Up’, which is set to be released this autumn.

Emma Lo Bianco graduated with a BA (Hons) in Acting in 2006 and has since gone on to star in a range of British, American and Italian TV shows and films.

‘Time is Up’, a romantic drama movie, stars actress and singer Bella Thorne as Vivien and her real-life fiancé Benjamin Mascolo as Roy. The story follows an accident which forces Vivien and Roy to come to a stop, reclaim their lives and finally start living in a present.

Taking on the role of Vivien’s mum Sarah, Emma took on quite a challenge when playing the character as a huge amount of the film is improvised. She said: “It was an interesting experience, playing a mum to an 18-year-old. We have a usual teen and mum relationship, full of ups and downs but the character needed a lot of empathy and as I was keen to make her three-dimensional, I tried to bring a lot of myself into the role. A lot of the film was improvised, so you really have to know your character inside out.”

Emma, who now lives in Rome, found herself in the ideal location when auditions for the movie were taking place: “The film is mostly set in Rome, with some scenes in Los Angeles and also in Spain. I’m originally from Hertfordshire, my mum is English and my dad is Italian, so after graduating and living in London for a while, I decided to move to Italy.

“One day last year, I was thinking how I was ready for a big role to get my teeth into. Later that day, my agent got in touch about the film and asked me to get the audition tape done as soon as possible. By that evening, I’d been cast in the film. It was one of those crazy things.”

Emma’s role in Time Is Up is just the latest in a series of parts that the alumna has landed in recent years, all thanks to her time at the Royal Birmingham Conservatoire: “Growing up, I’d been very studious but I became quite a naughty teenager. I went off the rails and my parents thought that I needed to find something to direct all this energy into. I got involved with a local play and thought it was really cool. I suddenly just loved acting and knew I wanted to go to drama school. I auditioned for the Royal Birmingham Conservatoire, which was Birmingham School of Acting at the time, and got in. I’m so glad that I did.”

Since then, Emma has played alongside Christopher Lambert in ‘The Gardener of God’, as well as TV movie ‘Coco Chanel’ and more recently Sky series ‘Devils’. Alongside acting, Emma also does voiceover work, as well as teaching Acting and English in Rome. Emma also sings and is a songwriter, currently specialising in Neo Soul Music, another talent she thanks her time at university for.

From over 15 years in the acting industry, Emma has plenty of advice to share to current students. She said: “You have to work hard, because it's not enough to just be talented, and you can't just wing it. You need to be fully prepared, know your lines and know your character very well. When you’re working on big projects, and you’re not the star, you might not get as many takes. So you need to be ready for your takes and for your close-ups to be top notch.

“My other advice is that you should keep on learning throughout your career. I still having a singing coach, and I also ask for dialect coaches during filming, to be completely prepared. When I first arrived at university when I was 18, I didn’t really know who I was. As acting students, it is important to really know yourself. If you don't know who you are, then how can you play other people? But ultimately, stay positive and always be determined.”

‘Time Is Up’ is set to be released this autumn.

Top tips on how to apply to Royal Birmingham Conservatoire

How networking whilst studying can lead to a choice of industry opport...

My experience of Applied Theatre at the Royal Birmingham Conservatoire