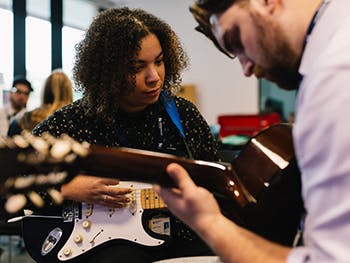 A-level music education provided by state schools could completely disappear by 2033 as a result of an alarming year-on-year decline, new research suggests.

Falling access to the music qualifications, accelerated by cuts in local and central government funding in recent years, has also led to the gap between state and independent music education provision widening, according to work undertaken by Dr Adam Whittaker and Professor Martin Fautley at Birmingham City University.

The academics’ findings reinforce fears of a future ‘talent pipeline’ shortage damaging the prospects of future artists and musicians from the UK - the world’s second-largest music market - with music academics, music education and music industry professionals calling for urgent intervention and a package of policy and funding measures to support the UK’s beleaguered state music education system.

Dr Adam Whittaker, Head of Pedagogy at Royal Birmingham Conservatoire, part of Birmingham City University, said, “We know from trends in A-level uptake over the last few years that the number of pupils taking A-level music has fallen to a very concerning level.

We are now in a position where there are parts of the country with very limited access to A-level music or, in some cases, no access at all.

“Children can't choose a qualification that isn't offered to them. What is the child who wants to take A-level music to do if the nearest school offering it is 30 miles away? We need A-level music, and other specialist subjects, to be offered in a range of schools right across a local authority area. This is important as A-level music can support young musicians to pursue music in higher education and their future careers, including as the next generation of music educators.”

Work by the academics has revealed that the proportion of students taking music education in the Midlands has dropped to just 1% following a fall in the number of schools and colleges offering the course as an option – in line with national uptake.

In their latest paper, available here, Dr Whittaker and Professor Fautley suggest ‘Those who lack the means to support private instrumental study are unlikely to have sufficient income to pay for independent school fees, even if a bursary supports them to a greater or lesser extent…the current rates of decline in entries in recent years shows A-level music is likely to have zero entries by 2033 if the current rate of decline continues in a linear manner.’

The Birmingham City University academics used data for music education in the region from an Education Policy Institute report on disadvantage attainment gaps in 16-19 education published in March 2021. This built on their earlier work for a 2019 study, commissioned by the Royal College of Music and the Royal Academy of Music, which discovered young people are less likely to take an A-level qualification in music if they come from deprived areas.

In the report, it was revealed that independent schools account for a disproportionately high number of A-level music entries when compared to national entry statistics.

Following the impact of the Covid-19 pandemic on music education across the country, UK Music Chief Executive Jamie Njoku-Goodwin has called on the Government to put music education “front and centre” to help support the talent pipeline of the world-leading music industry, and boost the mental wellbeing of many young people.’

Jamie Njoku Goodwin said, "There has been a worrying decline in the number of young people studying music at A-level in recent years.  Unless action is taken to reverse that trend, there is a real risk of serious damage to the talent pipeline on which the music industry relies.

"Music education enriches the lives of countless children and young people, but it also brings huge cultural, economic and social benefits to the UK.

"At UK Music, we are continuing to talk to the Government and education leaders about how we can ensure that children from every background get the best possible chance to study music which is one of our great national assets."

A £57 million home for the Royal Birmingham Conservatoire, a world-class institution providing exceptional training for the musicians, actors, stage managers and performers of the future, opened at Birmingham City University’s city-centre campus in autumn 2017.

Home to around 900 students from a variety of disciplines, the Conservatoire aims to prepare aspiring professionals to go on to inspire the next generation of learners to engage in the performing arts. Alongside ongoing curriculum developments in Music and Acting, RBC operates a hugely successful Learning and Participation programme that engages over 5,000 young people across the UK annually, including through the SoundLab initiative, the Youth LEAP ensemble and through research partnerships and projects with the OHMI trust and Arts Council England.

Professor Martin Fautley of the School of Education and Social Work at Birmingham City University where future teachers of music undertake their training and qualification programmes said, “We have been concerned about the falling numbers taking A-level music for some time. Music is an important part of the lives of many of our young people, yet fewer and fewer of them are choosing advanced studies in it whilst at school.

With the increasing fragmentation of the education system that this government has overseen, there exists the very real possibility that many of our youngsters will simply not have the opportunity for this study, even if they should want to do so.

The Birmingham Music Education Research Group (BMERG) based at the University, works with a diverse range of children and young people, including those with special educational needs and disability, and other personal challenges to learning. B-MERG champions music education research to facilitate a better understanding of musical thinking and making, to enable enriched educational experiences for young people.

In 2019, researchers from BMERG produced the four-year Exchanging Notes research report, in collaboration with Youth Music, which recommended using Grime, electronic music and hip-hop in classrooms to enhance wellbeing, and improve levels of attendance among disengaged pupils, while supporting their personal and social development.