Forum for Seventeenth- and Eighteenth-Century Music 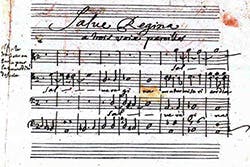 Intersecting with the French Music Research Hub, the Forum for Seventeenth- and Eighteenth-Century Music (formally created in autumn 2016) aims to promote research into, and performance of, music of the seventeenth and eighteenth centuries.

It brings together the strongest concentration of expertise in this area within the UK. The close links with performance, through work on performance practice and the creation of critical editions that lead to research-informed performance, mean that the Forum’s work is ideally situated in a Conservatoire setting. The Forum’s research expertise informs the curriculum at all levels; courses in performance practice, critical editing and the music of the period are offered to PG and UG students.

Three key approaches present in much of the Forum’s work: