Overview
Our Orchestras and Ensembles
Partner Organisations
Staff and Conductors 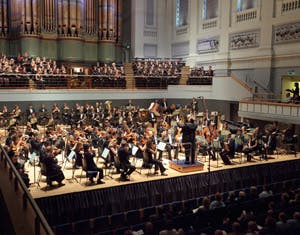 You'll have a wide range of opportunities to play symphonic music, as well as opera, classical pops, chamber, contemporary and period performance at Royal Birmingham Conservatoire.

We also go to the city’s splendid Victorian Town Hall for our end of year concerts, as well as performing in our own 500 seat Bradshaw Hall.

Our repertoire has included:

The Repertoire Orchestra is Royal Birmingham Conservatoire’s ‘apprentice’ orchestra, where you will have the opportunity to learn your craft as an orchestral musician. Concerts take place in The Bradshaw Hall, and cover a wide range of repertoires.

The Pops Orchestra gives the invaluable experience of working in the styles of light classical music.

In this ensemble we address the vital issue of working with contemporary classical music, usually in chamber music format.

Often, the composer whose work we are performing will be a part of the process. Recent examples have been:

The Conservatoire Folk Ensemble is a unique ensemble that performs a mixture of original folk-based music and traditional tunes specially arranged for the group under the direction of Joe Broughton. The Ensemble undertakes a UK tour every spring, featuring at festivals and events nationwide and occasionally working with guest artists.

Capelle is our dedicated period instrument orchestra which performs music from the early seventeenth to late eighteenth century. Students have access to the Conservatoire’s extensive collection of period instruments as part of their course and specialist Early Music tuition is available on most instruments. Recent performances have included Monteverdi’s Vespers of 1610, Baroque concertos by Vivaldi, Fasch and Wassenaer, Purcell’s Dido and Aeneas, and sacred works by Michel de Lalande directed by Artistic Director of Capelle, Jeffrey Skidmore, OBE.

Playing in the Opera Orchestra is a very special skill. Annual productions take place at the nearby Crescent Theatre, and recent highly praised performances have included Street Scene, by Kurt Weill and Puccini’s Trittico.

In addition, we work with a wide range of nationally and internationally renowned conductors, including visitors to the CBSO. Recent guests have included: