Royal Birmingham Conservatoire currently offers the best opportunities in the UK for the study of choral conducting. Our postgraduate courses are highly proactive and demand the same of you.

There are two masterclasses held during the year by distinguished choral conductors, and students run and conduct the Camerata chamber choir, giving an unusual amount of weekly podium time. Singing lessons form part of your entitlement during the course along with 1-1 tuition with Paul Spicer and involvement with the high achieving Chamber Choir.

There are other requirements depending on whether you choose to follow the MMus or PgDip course. 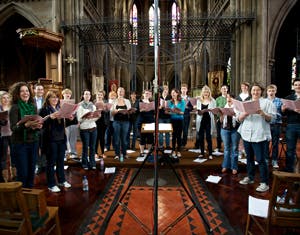 It is also possible to join in on other classes which may interest you, including language classes. For full details on these, including audition requirements, please see the Conducting (Choral / Orchestral) PgDip / MMus course.

Birmingham is a vibrant city with plenty of opportunities for outside work and experience with secular choirs or in a variety of churches or the city's two cathedrals.

Chamber Choir is a small specialist ensemble (24 voices) selected by audition and aiming to compete with the very best small specialised vocal ensembles.

The Choir gives at least three concerts and makes a CD recording each year. So far there are four highly acclaimed recordings.

A high proportion of the music recorded by the choir has never been recorded before. The choir has an ongoing relationship with Somm Records for whom the choir hopes to continue recording annually.

To Music, is an anthology of English 20th Century Choral Music (Regent Records, 2007).

Invocation, features music by James MacMillan (who attended the sessions) and Kenneth Leighton (2010).

Camerata was founded specifically for choral conducting students to run and to conduct. It has become a highly successful group in its own right, giving many concerts both in Birmingham and further afield. It will be the principal responsibility of you and your fellow choral conducting students to nurture this group, to manage and organise it, to choose the repertoire in consultation with Paul Spicer and the Conservatoire Library, to encourage singers to join, and to keep them interested and musically satisfied, thus keeping the group together and enjoying its work.

Many of our choral conducting students choose to set up their own groups. One successful example of this is alumnus Chi Hoe Mak's 'Icarus Ensemble', a contemporary vocal group working with students from the Composition Department to give them the opportunity to learn more about writing for choirs and the experience of working with singers.

This group recently gave a workshop and concert at the RNCM in Manchester and is continuing its important work under a current student.