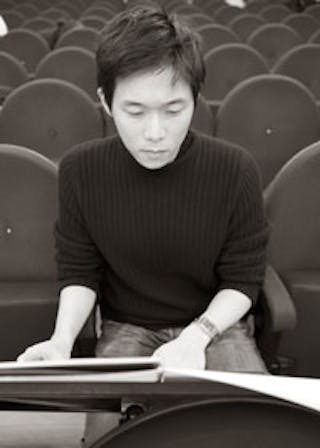 The first impression of the Conservatoire was ‘friendly’ to me. There were numerous welcoming people. The atmosphere of composition department was sociable and people are open to each other. The lecturers were friendly and also enthusiastic – they pushed me to work hard and creatively. My colleagues and lecturers generously supported me so that I adjusted to the city smoothly.

I have also been selected in London Symphony Orchestra’s Panufnik Composers Scheme. The new orchestra work will be written for the LSO and the piece will be performed by the orchestra and conductor, Francois-Xavier Roth, at the public workshop in London in February 2014.

In Rome, Italy, I was awarded first prize in the International Valentino Bucchi Composition Prize for my ensemble work, Two Dreams. The awarded work will be premiered and published in Rome in 2014.

The ensemble work, Rain falling on Stained Glass, which I wrote in Birmingham for Birmingham Contemporary Music Group Workshop, was selected for the 2013 International Society for Contemporary Music (ISCM) World New Music Days held in Austria and Slovakia. The work will be performed in the ISCM festival in Kosice in November 2013.

My orchestra work, Seven Days / Stained glass / Mirror was selected in the 2012 International New Music Forum, Manuel Enriquez, in Mexico. The piece was performed by The National Symphony Orchestra of Mexico in Mexico City in June 2012.

I was chosen for International Composers Pyramid – Sounds New Festival held in France and UK. The commissioned work, 1+1=1 / Panorama, was premiered in Lille and Canterbury by ICP Ensemble in December 2011.

I was selected for 2012 Britten-Pears Young Artist Programme. I had an opportunity to compose a new work studying with Helmut Lachenmann. The work, Torn Wings / Moments II for Piano, was premiered at the Aldeburgh Music Festival in June 2012.

I participated in the North Highland Connections Creative Week held in Thurso, Scotland. The ensemble work, Momenta, that was composed during the project week was premiered by ensemble NYOS Futures and conductor Nicholas Cleobury in Thurso in July 2012.

I had an individual recital with my chamber works at 2012 World Event Young Artists Festival held in Nottingham in September 2012. Two ensemble works, Rain Falling on Stained Glass and Snow Falling on Chagall’s Village, and the piano solo work, Torn Wings / Moments, were presented in Lakeside Arts Centre Recital Hall in Nottingham.

My orchestra work, Seven Days / Stained Glass / Mirror, will be performed by Barcelona Symphony Orchestra in Barcelona next year. Two of my ensemble works are scheduled to be performed by TIMF (Tongyeong International Music Festival) Ensemble in Seoul, Korea in December 2013.

The compositional techniques and orchestration study I achieved in Birmingham Conservatoire still affect my working. In addition, the diverse aesthetics of contemporary arts I learned in Birmingham are invaluable resources for my composition.