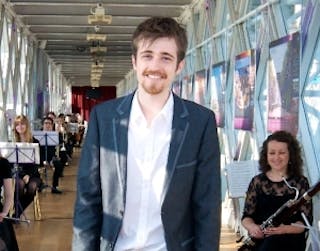 While the rest of the country may remember the summer of 2012 for the Olympic Games, it has been more of a personal musical marathon for 25-year-old composer Samuel Bordoli with the premiere of his new Live Music Sculpture at Tower Bridge in July followed by a new opera in August, performed at the Riverside Studios in Hammersmith.

A former student at Birmingham Conservatoire (graduate 2009), Samuel Bordoli, who currently holds the Mendelssohn Scholarship and has won numerous prestigious awards, looks set to become one of the foremost composers of his generation. His ambitious Live Music Sculptures, which are composed specifically for the buildings they will be performed in, have seen Samuel take contemporary music in an entirely new direction and have achieved rave reviews both from audiences and the press, with Stephen Pritchard inThe Observer, calling his music ‘beautiful and ethereal’.

Born and brought up in Bedford, music composition began as play for the young Samuel. Soon after he started learning the piano at the age of eight he was, as he says, “fiddling around making up little tunes”. His interest in composition continued into his teens, when he was encouraged by the head of music, and his first orchestral piece – a horn concerto – was performed by the Bedfordshire County Orchestra when he was 16!

Samuel then went on to study composition at Birmingham Conservatoire and the Royal Academy of Music, where he has since been awarded a Fellowship. One of the highlights from his time in Birmingham was when Samuel’s Eta Carinae Nebula was performed by the Birmingham Contemporary Music Group in the Boulez in Birmingham Festival in 2008. Samuel recalls “having a piece performed in the presence of Pierre Boulez and hearing his feedback afterwards was a great privilege and a rather liberating musical experience”. Samuel’s compositions have since been performed by ensembles including the London Sinfonietta, Tête à Tête Opera Festival, Exaudi and the Southbank Sinfonia.

In terms of the music he composes, Samuel Bordoli looks to JS Bach and Beethoven as musical influences, but is also often inspired by poetry and literature. As well as composing opera, one of his chief interests is in exploring the space where sound occurs, using particular techniques in a way that other composers have not done before. He founded his music company Live Music Sculpture in 2010 and his first work was performed at the Monument in London in 2011. Hailed as the ‘Critics Choice’ byTime Outmagazine, the piece effectively utilised the height and acoustics of the Monument and was a resounding success. A featured composer in the City of London Festival 2012, Samuel’s next project at Tower Bridge in July 2012 was even more ambitious, and, looking ahead to the future, Samuel is interested in producing a piece of work for London’s latest iconic building The Shard.

Samuel explains “Human beings have the remarkable ability to hear and process 360 degree sound. It is impossible for our eyes to see everything around us at once, but if we close them, it is likely we will have a good idea of what is going on all around us thanks to our ears. When we listen to live music, we usually sit in one place, facing one direction, while the sound comes from the front. This is rather like only ever looking at a piece of sculpture from one angle. Instead of utilising the incredible scope of our hearing, our aural experience is restricted and our creative choices are limited. A live music sculpture is a natural progression from this conventional way of experiencing and conceiving music. It is a form where we can explore the relationship we have with our own ears and the endless acoustical possibilities of sound and the way that its physicality impacts upon linear or spatially conceived structures. It blends together the ideas of music, time, sculpture and space.”

Following the success of Live Music Sculptures, Samuel composed an opera, Amerika, premiered at the Tête à Tête Opera Festival at the Riverside Studios, Hammersmith, in August. This is a whimsical adaptation of Kafka’s novel which follows the naïve Karl Rossman on his hapless travels across Amerikawhere he is corrupted and taken advantage of in a world of upside-down justice and significant wealth. The composer’s own witty libretto and inventive music were both very well received by a packed-out audience, brought to life by the ingenious direction of Bill Bankes-Jones.

Written on behalf of Sam Bordoli by Francesca Collin of Aneela Rose PR.