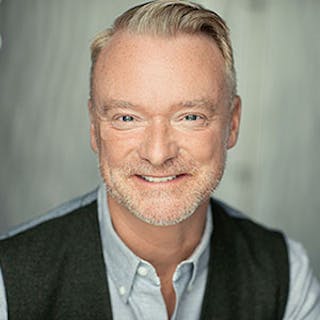 Alongside his regular acting work, particularly in radio and the theatre, David has also built a successful career as a voice artist for commercials, documentaries and animation.

Before graduating in 1991 I enjoyed the wide range of coursework and in particular the emphasis on voice production and theatre skills, which have both influenced my subsequent career as a theatre and radio actor and voice artist.

My career highlights include performing the part of Alan Bennett in a UK number 1 tour of 'The Lady in the Van' with Susan Hampshire in 2005/6. I also wrote a radio series, 'Tales from the Tower', in 2001 for BBC Radio 4 in which I played all of the characters.

I think that you must treat your training at drama school as a professional job – work hard, listen (and keep listening) and learn, but don't be afraid to question and challenge. Have fun and experiment. This is the time to make mistakes, learn from them, and not worry about it. But if your intention is just to "become famous", then walk away now – go and audition for X-Factor and leave the rest to the professionals. And one last, very important thing: Join Equity! They are the only protection we have.

Alongside his regular acting work, particularly in radio and the theatre, David has also built a successful career as a voice artist for commercials, documentaries and animation.