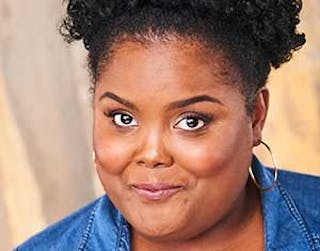 Danielle Pinnock, esteemed actor, playwright and Royal Birmingham Conservatoire alumna has built an impressive résumé since graduating from the MA Acting in 2013.

Danielle entered her dissertation project –Body/Courage – into the Strawberry One Act Theatre Festival in New York, with the hope of raising awareness of the varying perceptions of body image. Following the production's success, she's won Best Actress at the New York festival; a TimeOut Theatre Award; and Chicago Reader called her performance a “tremendous feat in acting.”

Her career has skyrocketed in the last couple of years particularly; she currently stars in the hit CBS comedy, Young Sheldon, the spin-off to the popular multi-Emmy award-winning television series, The Big Bang Theory. Prior to this she also appeared in an episode of This is Us – An NBC series that was nominated for Best Television Series – Drama at the 74th Golden Globe Awards and Best Drama Series at the 7th Critics' Choice Awards, as well as being chosen as a Top Television Program by the American Film Institute.

Earlier this year Danielle had a guest star slot on Scandal with Viola Davis and Kerry Washington for Director/Producer Shonda Rhimes.

Danielle has commented on the impact her time studying in Birmingham had on her journey:

“The teaching is incredible! The professors are truly amazing. Lise Olson, Louise Papillion, Alex Taylor and Stephen Simms really taught me everything that I need to know to survive this industry. They always challenged me past what I thought I could attain. With these teachers I was able to accomplish more in a year than I would have at a three-year programme.”

‘The Body Image Project’, which Danielle produced, performed in and co-directed with Tony Award nominee Da’vine Joy Randolph, follows Danielle’s quest to find people in the US and UK to share their personal stories on their bodies, and is based on verbatim interviews.

“Even though I’ve always been the ‘chubby’ girl in school, it has never affected my love and passion to perform. Body image is a topic that I feel needs to be addressed in theatre.”

Interested in sharing a similar journey to Danielle? Take a look at the MA Acting course