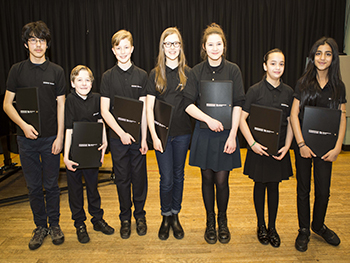 30 young performers from two Birmingham secondary schools will be taking to the stage this week in London as part of a new community vocal project.

Through an initiative similar to TV’s ‘The Choir’, students from Aston Manor Academy and Queensbridge School have been working with Birmingham Conservatoire ahead of a performance in the capital, where they will showcase a new choral piece.

The pupils have been chosen for the project by their music teachers who think they have an aptitude and passion for all things musical. They will perform the new work alongside students and staff from Birmingham Conservatoire.

The vocal ensemble will debut the new work – titled ‘In the Silence’ – at Olympia London on Thursday 25 February as part of Music Education Expo, Europe’s largest conference and exhibition for anyone involved in music education. Organised by Rhinegold Publishing, the event features over 60 seminars, workshops and debates – alongside over 130 exhibitors – across two days.

‘In the Silence’ – inspired by Christina Rossetti’s poem ‘Echo’ – has been written especially for young people by sixth form student Nicole Brocksom as part of a nationwide competition commissioned and selected by Music Education Expo. The judging panel featured Birmingham Conservatoire choral specialist and PhD student Daniel Galbreth, who will also conduct the choir’s London performance.

The Music Education Expo team are delighted by the partnership with the Birmingham Conservatoire Youth Vocal Ensemble for this year’s event. Our brand new performance stage will showcase some wonderful young talent from across the UK and it is with great pleasure that we have joined forces with Birmingham Conservatoire to present the winning piece from our Composition Competition.
Louise Greener, Music Education Expo Project Manager

“An original piece for soprano, alto and tenor voices was commissioned, with the Birmingham Conservatoire Youth Vocal Ensemble in mind, and we can’t wait to hear the end result! Our winner, Nicole Brocksom – a sixth form student at Harrogate Ladies’ College – will be there to collect her prize and hear the piece premiered.”

Alongside ‘In the Silence’, the pupils will also perform ‘Panda Chant’ by Meredith Monk and Mark Ronson’s 2014 hit single ‘Uptown Funk’.

The students, aged between 11 and 16, will be introduced by Birmingham Conservatoire Principal, Professor Julian Lloyd Webber, who will also be addressing the Expo about his career and educational work earlier in the day.

“In such a short space of time, the Birmingham Conservatoire Youth Vocal Ensemble have put together a fantastic performance programme that will delight the Music Education Expo audience. All the pupils involved have brought endless amounts of passion, enthusiasm and professionalism and they should all be very proud of their achievements.”

The community vocal project forms part of the Conservatoire’s wider Learning and Participation programme, which aims to engage talented young musicians from diverse backgrounds in high quality musical experiences. The programme sees the Conservatoire work with schools, charities and arts organisations, both locally and nationally.