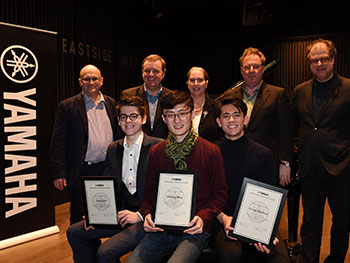 Jonas Stark, George Harliono and Bocheng Wang will each receive €2,000 to support their studies and help launch their professional performing careers. Stark and Wang are currently enrolled at London’s Royal Academy of Music while Harliono is a student at the Royal College of Music.

From over 50 applicants, 10 students were selected to take part in the finals at RBC’s Eastside Jazz Club, performing their own choice of repertoire on the Conservatoire’s CFX – Yamaha’s flagship concert grand piano.

According to Thwaites, the highlight of Wang’s programme was his “accomplished and highly committed performance” of Rachmaninov’s Piano Sonata No 2, while Stark gave authoritative readings of sonata movements by Haydn and Chopin, followed by “a very fine” Toccata from Enescu’s Suite No 2.

Harliono began with a Bach transcription “in which he shaped the melodic line extremely well, going on to dazzle with virtuoso fireworks in a piece written especially for him [by Russian composer Mikhail Arkadev] as well as Liszt’s operatic paraphrase on Verdi’s Rigoletto”.

Harliono regularly plays Yamaha pianos, but for Stark and Wang it was their first experience of the CFX. “The sound is absolutely gorgeous,” said Wang, “and helped me to dig deep in the emotional passages of the Rachmaninov.” Stark was initially “quite surprised” by the feel of the CFX, but “got used to it very quickly and was able to make the most of its advantages”. Harliono praised the instrument’s “bright sound and lovely singing quality”.

All three scholars expressed delight at having been selected. “Being a musician is not cheap,” said Harliono, “but Yamaha is really good at supporting young musicians.”

The Yamaha Foundation of Europe (YMFE) is a not-for-profit charity that provides support and performance platforms for the next generation of classical music talent.

Founded in 1989, the YMFE Scholarship competitions take place in 32 countries and have endowed over 1,000 scholarships totalling more than €1 million.