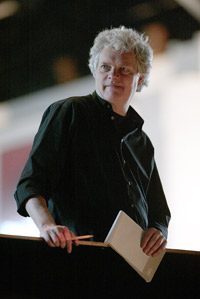 Following the success of Birmingham Conservatoire’s Frontiers+ festival during March 2012, Heiner Goebbels returns to Birmingham this week for the UK premiere of Walden at Mac Birmingham, as part of the opening weekend of the London 2012 Festival.

The London 2012 Festival is a spectacular 12-week nationwide celebration running from 21 June and running until 9 September 2012, bringing together leading artists from across the world with the very best from the UK.

Walden will be performed on Saturday 23 June by Ensemble Klang, narrator/vocalist Keir Neuringer and Birmingham Contemporary Music Group. As part of its end-of-year celebrations, the Conservatoire Symphony Orchestra will perform parts of his counterpart piece, Surrogate Cities, the day before the Walden premiere, as part two of their celebration of Heiner Goebbels.

Heiner Goebbels is one of the world’s leading and most sought after creative artists. In addition to an Honorary Doctorate from Birmingham City University, he recently received the prestigious International Ibsen Award, was celebrated with the London premiere of Surrogate Cities at the Festival Hall and as part of the Room for London Art angel installation at Southbank Centre.

Walden is based on Henry David Thoreau’s account of his retreat to simple living and self-sufficiency, his experiences over two years in a cabin he built near Walden Pond close to Concord, Massachusetts. His experiment was an attempt to ‘live deep and suck out all the marrow of life’. The UK premiere features the original artists and production team who created this version of Walden in 2006, Ensemble Klang, plus musicians from Birmingham Contemporary Music Group.

Inspired by Goebbels’ work and Thoreau’s writing and ideas, the whole site of Mac Birmingham will be brought to life during the day, including new music theatre from Birmingham Conservatoire; films; visual arts; talks and discussions; writing workshops; and a ‘foraging menu’ in the café.

For further information and to book tickets for Surrogate Cities and Walden, click here.