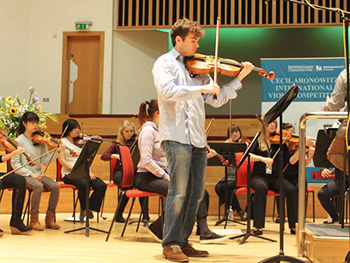 The competition, took place on 25 and 26 October in Adrian Boult Hall and attracted entries and performers from all over the world.

Ridout has won two concerto performances with Orchestra of the Swan and a trip with all expenses paid to give a recital at the International Viola Congress held in Porto, Portugal in November 2014.

The very first Cecil Aronowitz International Competition was a huge success, with not only providing inspiring and unforgettable music-making from the violists who had travelled from across the globe to compete, but also many memorable concerts.

These included those given by jury members, Birmingham Conservatoire Symphony Orchestra conducted by Mike Seal with soloist Jonathan Martindale and Lucy Nolan, master classes delivered by Roger Chase, workshops given by Ross Cohen, Luthier displays and a talk remembering Cecil Aronowitz given by members of his family, friends and ex-students.

The atmosphere was warm, welcoming and the weekend was clearly enjoyed by all who attended!

Violaine Despeyroux from France won the prize for the winning performance of Solo Bach and Shishi Gong, from China, won the award for the most promising competitor aged 15 years and under.

The four violists, who made it through to the final on the Sunday, were: Silas Zschocke (Germany), Tomohiro Arita (Japan), Timothy Ridout (UK) and Violaine Despeyroux (France). Louise Lansdown said:

This competition has been dedicated to the memory of a great musician who believed wholeheartedly in the message of music and lit up every musical event he was a part of throughout his life. The weekend finished with competitors and jury members playing Viola Ensemble Music in a restaurant in Birmingham on Sunday night!