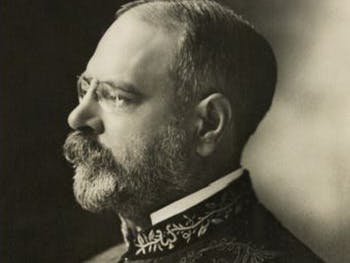 A CD of music by the ‘American March King’ John Philip Sousa (1854-1932), recorded by Royal Birmingham Conservatoire’s Wind Orchestra, has just been released on the Naxos label.

The recordings form Volume 21 of the Naxos series of music by Sousa, most famous for his patriotic march ‘The Stars and Stripes Forever’ and ‘The Liberty Bell’, which is well known for its use as the theme for Monty Python’s Flying Circus.

They were made in RBC’s Bradshaw Hall in April 2018, when the Wind Orchestra spent a week working on this 65-minute release and also gave a public concert of the three pieces featured here under the baton of Keith Brion, a specialist in Sousa’s period style.

Sousa rose through the ranks rapidly, becoming conductor of the United States Marine Band at 26 years old, and was a prolific composer and arranger. His robust, patriotic operettas helped introduce a native musical attitude in American theatre.

The disc opens with selections from ‘Chris and the Wonderful Lamp’, Sousa’s musical retelling of the Aladdin story. This is followed by ‘Sisterhood of the States’, which includes characteristic tunes from each of the (then) 48 US states, and ‘Showing Off Before Company’, which includes solos from Caroline Simpkins on bassoon and RBC’s Principal Harp Tutor Rita Schindler.

The disc was engineered by RBC’s Matt O’Malley, and provided a fantastic opportunity for the 55 Wind Orchestra students to experience the recording process and to gain knowledge from experts about a famous composer seldom heard in music colleges across this country.

The CD can be ordered via the links to online stores found here.