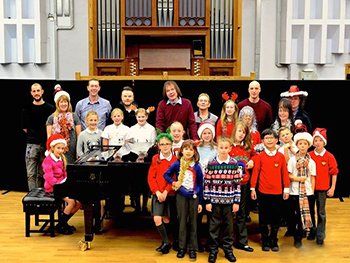 A retired schoolteacher from Solihull has teamed up with Birmingham Conservatoire, as they join the race for the Christmas number one, while highlighting the particular struggles faced by those affected by dementia over the Festive period.

Birmingham-born Alan Stott has written big band hit ‘What Are We Gonna Do For Christmas?’ with an arrangement by Birmingham Conservatoire fourth year BMus Jazz student, Josh Tagg. Jazz students from across all years of study also perform on the track.

The song was officially released on Tuesday 22 November and is currently sitting at number one in the Official UK iTunes Top 40 Jazz Chart.

Recorded and produced at Birmingham Conservatoire by Matthew O’Malley, with support from technician Minos Koutedakis, ‘What Are We Gonna Do For Christmas?’ boasts vocals from professional singers Simon Dorey and Michelle Lawson.

16 pupils from Haslucks Green Junior School in Shirley, West Midlands – where Alan taught for eight years – also feature on the song. Together, they are known as the Giving Is Easy Big Band and they hope to raise £25,000 for the Alzheimer’s Society.

Several years ago, I watched, helpless, like so many of us, as my mother slipped into Alzheimer’s and dementia. Not only is Christmas when I most miss her, my mother’s passing brought back many sad memories of visiting other elderly relatives at Christmas, and remembering how they struggled so much while everybody else was celebrating and having a good time.
Alan Stott, songwriter

“I knew then that I wanted to do something poignant, not only to raise money to help dementia sufferers like my mother, but also to raise awareness of the thousands up and down the country who don’t see Christmas with the same joy as the rest of us because of their condition.”

Alzheimer's disease is the most common cause of dementia. Dementia refers to a set of symptoms that can include memory loss and difficulties with thinking, problem-solving or language. These symptoms occur when the brain is damaged by certain diseases, including Alzheimer's disease, with older people more prone.

Christmas can be a particularly difficult time for people with dementia, as festivities can agitate, confuse, and over stimulate people with Alzheimer’s disease. Meanwhile, loneliness and isolation is a problem for lots of older people, particularly at Christmas, but it is accentuated by those struggling with dementia.

Richard Shrewsbury, Learning and Participation Manager, Birmingham Conservatoire, said as soon as he heard the early demo of the track, he was keen for the institution to be involved:

“Not only is it a fantastic song in the tradition of some of the greatest big bands, Alan’s cause further propelled me to ensuring Birmingham Conservatoire did all it could to help make this project a success.

My grandfather suffered with Alzheimer’s, a disease that eventually saw him going into a home and being separated from his wife of more than 50 years. Some people choose to run for charity, others choose to jump out of aeroplanes; Birmingham Conservatoire chooses to help produce music for charity and we are really proud to be part of an ever-growing crowd that have put time and effort into such a worthwhile cause.

The track is accompanied by an evocative video depicting an elderly couple dancing and was filmed in Leamington Spa’s art-deco The Assembly. 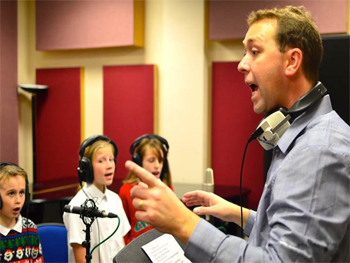 The song itself was performed for the first time live on Tuesday 22 November at the installation ceremony for Birmingham City University’s new Chancellor, Sir Lenny Henry, in front of a prestigious audience at Birmingham Town Hall.

Alan, a musician for over 50 years, said the song itself was inspired by something we all do every year:

“It’s essentially a dialogue between a couple making plans for the Christmas period. It’s something we can all relate to; around September we all turn our attention to the Festive season and ask: ‘What are we going to do for Christmas?’ It’s on its way.

“I said to my family ‘Somebody ought to write a song with that title’ and so I set about writing it on my grandson’s keyboard – there and then. The melody was completed in less than 30 minutes.

“That was over two years ago and I am incredibly thankful for all the hard work, enthusiasm and talent at Birmingham Conservatoire that has truly brought my song to life, and I just hope the public enjoy the song as much as I do.”

It is estimated that around 850,000 people in the UK have dementia, which is predicted to rise to over two million by 2051.

“Christmas is a time of year when families come together and it’s great to see so many people and organisations, such as Birmingham Conservatoire, rallying around Alan’s charity single: ‘What Are We Gonna Do For Christmas?’

“Dementia poses a challenge to many families across the West Midlands and it can prove quite isolating. Alzheimer’s Society is very grateful for Alan’s support and the funds raised will contribute to important research into dementia and valuable services for those currently living with the condition.”

Earlier this month, new figures showed that Alzheimer’s disease and other dementias have replaced ischaemic heart disease as the leading cause of death in England and Wales for the first time.

225,000 people will develop dementia this year, which equates to one person every three minutes.

Giving Is Easy Big Band – ‘What Are We Gonna Do For Christmas?’ is out now on and available to download via iTunes and Amazon and you can watch the official video below:

You can also make a donation via Alan Stott’s JustGiving webpage.