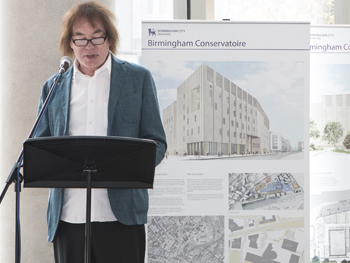 The new Birmingham Conservatoire has officially opened its doors with its Principal, Professor Julian Lloyd Webber, claiming it will be the “last-ever” performing arts institution of its kind to be built in the UK.

“The new Birmingham Conservatoire emerges during a difficult time for arts funding and music education, meaning our role in training the world’s next great musicians and actors is more vital than ever. Personally, I don’t think there will be another built in the UK.

“Of course, a building is only as effective as the people inside it, and my team and I will continue our work to ensure that the future arts industry is not dominated by the wealthy elite.

Our impressive programme of learning and widening music participation benefits thousands of children, young people and their families from diverse communities across England, and our new home will become the central hub of all of these crucial activities.
Professor Julian Lloyd Webber

In addition to this, double and triple-glazed windows have been used to achieve the onerous acoustic requirements, supported by bespoke timber panelling throughout the building.

“We are looking forward to welcoming our new and returning students in the next few weeks, as well as launching our public programme, which will formally commence with our opening season next year.

With a history dating back to 1859, Birmingham Conservatoire is one of the leading music and drama academies in the country, being the third highest ranked UK conservatoire for music in the Guardian University Guide 2018.

“Birmingham Conservatoire has nurtured the talent of many household names, including singer-songwriter Laura Mvula, conductor Mike Seal and actor Nicol Williamson. Our fantastic new facility will ensure we can equip future performers with the skills they need to meet the demands of today’s fast-paced creative economy.

“However, this is not just a state-of-the-art home for developing the next generation of talented and versatile performers, but it will also enrichen and deepen the university experience for all our students, who will be able to make full use of its facilities and enjoy the rich programme of events planned.

“The new Birmingham Conservatoire is also a world class venue for the city, that will strengthen our region’s enviable cultural offering. Birmingham has always been proud of its role as a national centre for excellence in performing arts, and the creative industries are growing faster here than anywhere else in the country – employing around 34,000 local people – and our new facility will bolster this further.

“The new Birmingham Conservatoire is a significant investment for the University, the city and, indeed, the country as a whole, and one in which will certainly set a new global benchmark for music and drama education and performance.”

The new Conservatoire is located alongside Millennium Point, adjacent to Jennens Road in the Eastside region of the Midlands city. The development has been made possible in partnership with Millennium Point and Birmingham City Council.

At the launch, alongside tours of the new building and performances by current Birmingham Conservatoire students, invited guests were presented with a bottle of ‘Principal’s Ale’, a bespoke beer created by Wye Valley Brewery to mark the opening.