Putting Birmingham musicians on the map 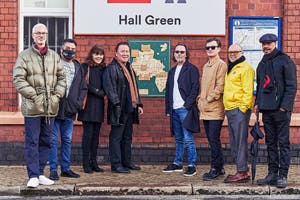 Members of UB40 recently launched a new series of maps celebrating the musical heritage of Birmingham, which are being rolled out across 30 local railway stations.

Revealing the first specially commissioned map at Hall Green station as part of the Musical Routes project, the reggae musicians welcomed the installation, which immortalises music and musicians from the area, where alongside UB40, major artists such Ocean Colour Scene and RBC alumna and honorary doctorate recipient Laura Mvula started out in their careers.

Adam Regan, Director of the Hare and Hounds, located in nearby Kings Heath, which hosted UB40’s debut gig in 1979, joined the musicians to officially unveil the map.

The Musical Routes project, conceived and produced by the city’s Birmingham Music Archive, will show rail passengers the roots of Birmingham’s musical heritage, thanks to funding from West Midlands Railway’s Your Community, Your Fund grant.

The maps celebrate top Brummie artists Ozzy Osbourne and Black Sabbath, The Beat, Joan Armatrading, Andy Hamilton, Jamelia and Duran Duran, along with many more, as well as profiling iconic venues such as The Que Club and Rum Runner – giving visitors an instant insight into the stars who were born in the city and the venues that played host to them.

BCU School of Media alumnus and Birmingham Music Archive Founder Jez Collins said: “As a city, we need to celebrate and promote these stories of global importance. Musical Routes will reach hundreds of thousands of people each year, as they travel across the train network, especially ahead of an influx of visitors to the city for the Commonwealth Games in 2022.

“It’s a fantastic opportunity to highlight, through truly beautiful locally-produced maps, many of Birmingham’s truly great musicians and venues.”

The maps were researched, designed and produced by artist Claire Hartley and the Birmingham Music Archive.A total of30 intricate 3D wooden versions of the maps have been produced by designers from Birmingham-based studio Space Play, and will feature Spotify codes that link to a curated playlist for each area.