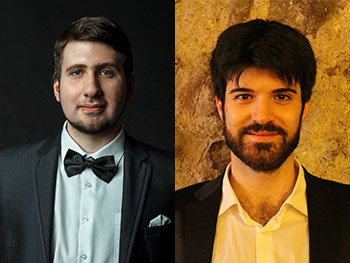 Two Royal Birmingham Conservatoire alumni have been selected for the preliminary rounds of the 18th Chopin International Piano Competition in Warsaw, due to take place this October.

Andrei Ivanov and Luigi Carroccia will be aiming to reach the finals of the competition, which celebrates the music of the popular Polish composer and provides a showcase for the best up-and-coming piano talent.

Both will face four highly-competitive stages to reach the finals, and will be judged by an expert panel of artists, experts and educators.

Andrei studied at the Moscow Conservatory before coming to RBC, and has won prizes in numerous international piano competitions, including first prize at ‘Jeunesses Musicales’ in Belgrade, and the Minsk International Piano Competition. He has given recitals at such venues as the Moscow Conservatory, St Petersburg Philharmonic, Amsterdam Concertgebouw and Kolarac Hall in Belgrade, and has performed with symphony orchestras in Belgrade, Bucharest, St Petersburg, Moscow and Valencia.

Luigi comes from a musical family, and his first teachers were his father and grandfather. He continued his studies at the Claudio Monteverdi Conservatory in Bolzano and RBC. He has won many competitions including the Maria Herrero International Competition in Granada, and participated in the previous Chopin International Piano Competition. He has performed in Italy, Poland, Turkey, the US, the UK, Bulgaria, Germany and Japan, and is currently artist-in-residence at the Queen Elisabeth Music Chapel in Waterloo, Belgium.

For more information about the competition, see its website.