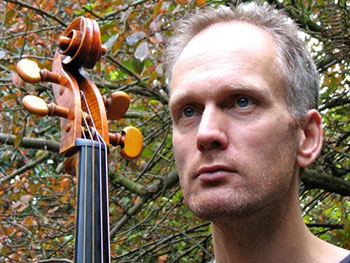 The appointment follows hot on the heels of the Chinese cellist Jian Wang’s arrival as the Conservatoire’s International Chair in Cello beginning in September 2017.

As a cellist and teacher, Ben Davies has performed with artists and orchestras as diverse as Shirley Bassey, Peter Gabriel, the City of London Sinfonia, Garsington Opera Orchestra and members of the Amadeus Quartet.

He has previously taught at the Royal Academy of Music, Royal Holloway University of London, Marlborough College, Wells Cathedral School and the Guildhall School of Music.

On taking up his new role at Birmingham Conservatoire, Ben Davies said:

“I am honoured to be invited by the Principal, Professor Julian Lloyd Webber, to join the cello department at the newly located Birmingham Conservatoire".

I very much look forward to working with the cello students and am excited to be involved with the musical life of the Conservatoire in its new home.

Born and raised in York, Ben studied at the University of Manchester and the Royal Academy of Music, and from 1990 to 1995 he was cellist in the Rosell Quartet. Since 2000 Ben has been Principal Cello of the English Touring Opera orchestra. Seasons have included Baroque operas performed on period instruments, and the Olivier Award winning production of ‘King Priam’ in 2014.

In 2012 Ben was elected as an Associate of the Royal Academy of Music (ARAM) in recognition of his signiﬁcant contribution to the music profession.

Ben enjoys a diverse career, combining his commitment to teaching with a rich variety of freelance playing, which has included performing with Dame Shirley Bassey on the Pyramid Stage at Glastonbury, touring with the Royal Shakespeare Company and working in the theatres of London’s West End.

Prior to being offered his new role at Birmingham Conservatoire, its Principal, Professor Julian Lloyd Webber, invited Ben to give a masterclass to current students. He said:

“I am delighted to welcome Ben Davies to the Birmingham Conservatoire family. It is a real pleasure to have him join us at this crucial time for the Conservatoire, as we move in to our new home.

Together with the recent appointment of Jian Wang as our International Chair in Cello we now have a cello department which is one of the best in the world.”

The new Birmingham Conservatoire has also been announced as the leading venue for the prestigious BBC Young Musician competition in 2018, as the contest prepares to celebrate its 40th anniversary.

Following the regional auditions later this year, Birmingham Conservatoire will host the Category Finals between Friday 16 and Tuesday 20 March 2018, alongside the Semi Final on Friday 23 March. All performances in Birmingham will be recorded for broadcast on BBC Four.