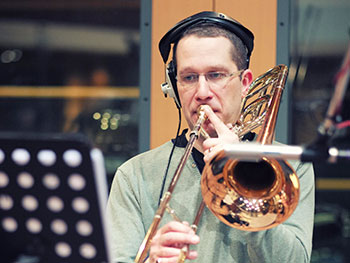 One of the UK’s most prolific trombonists has been announced as the new Head of Brass at Birmingham City University’s Royal Birmingham Conservatoire.

Originally from Bristol, Amos Miller started playing the trombone aged nine and went on to study at Oxford University – during which time he studied with Denis Wick – and the Royal Academy of Music, learning with Ian Bousfield.

Having gained the DipRAM, the Royal Academy’s highest award for performance, he completed the Jazz Course at the Banff Center for the Arts in Canada under artists such as Jim Hall and Kenny Wheeler.

“I am completely delighted to be joining the wonderful team at Royal Birmingham Conservatoire, especially at such an exciting time in its history.

The resources of talent in both the staff and student cohort are world-leading; combine these with the astonishing new building and it is an unmissable opportunity. Birmingham is finding its rightful place at the heart of the UK's cultural life, and it's a real thrill to be a part of it. I can't wait to get started!

Amos is a founder member of internationally acclaimed brass quintet Onyx Brass, and has combined the post of Principal Trombone with the Royal Ballet Sinfonia (the orchestra of Birmingham Royal Ballet) with a busy freelance career, in which he has worked as guest Principal Trombone with most of the UK’s leading orchestras including the London Philharmonic, Philharmonia, BBC Symphony, Royal Philharmonic, English National Opera, Royal Opera House Orchestra, the City of Birmingham Symphony Orchestra, Royal Liverpool Philharmonic, BBC National Orchestra of Wales, BBC Scottish Symphony Orchestra, the English Chamber Orchestra, Academy of St. Martin’s, the London Sinfonietta and the Orchestra of the Age of Enlightenment. 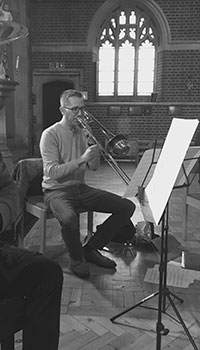 He has played for over 100 film soundtracks, including ‘Solo: A Star Wars Story’, ‘Wonderwoman’, ‘Lord of the Rings’, ‘Harry Potter’, ‘Terminator Salvation’, ‘Inception’, ‘Paddington’, ‘Mission: Impossible’ and ‘Superman’.

“We are delighted to welcome Amos Miller to Royal Birmingham Conservatoire. Amos is renowned throughout the music profession as one of the world’s top brass players and it will be a privilege to work alongside such a master.”

The Brass Department at Royal Birmingham Conservatoire offers tuition in orchestral and brass band instruments, and its team of tutors have the expertise to address all areas of performance and technique by helping students to diversify their skills in both areas, as well as jazz and early music.

Alongside various band, orchestral and chamber music activities, the Brass Department offers a full schedule of masterclasses and brass classes covering everything from practice technique to orchestral repertoire.

The Department also offers bespoke tuition at postgraduate level, for student brass quintets who wish to consolidate their ensemble skills while developing their individual playing abilities.

Amos Miller will take up his position as Head of Brass at Royal Birmingham Conservatoire in September 2018.