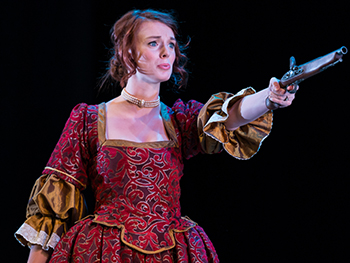 Students at Birmingham Conservatoire, part of Birmingham City University, have unanimously backed its Acting course, after it received a 100 per cent overall satisfaction rating as part of a national assessment.

The news comes following the publication of the National Student Survey (NSS) 2017, which gives final-year undergraduates the chance to provide honest feedback on what it has been like to study on their course at their institution. Over 300,000 students took part in the survey this year, around 68 per cent of those eligible.

Acting joins five other Birmingham City University courses that have received a 100 per cent overall satisfaction rating, which are Accountancy, Design for Theatre, Performance and Events, English Literature, Interactive Entertainment and Rehabilitation Work.

The results are gratifying and we hope they reflect the students’ appreciation that their experience, learning and growth lie at the heart of the course.

“This year of graduating students had a tremendous work ethic and took advantage of all the opportunities the BA Acting course offered; opportunities that will only increase with the imminent merger. We look forward to seeing their future success.”

Celebrating its 80th anniversary last year, Birmingham School of Acting formally merges with Birmingham Conservatoire in September 2017. Comprising 11 studios, including a large performance studio, the Conservatoire has set a new benchmark for drama training facilities in the UK.

A further 26 courses at Birmingham City University were ranked at 90 per cent and above in the NSS for overall satisfaction, such as Criminology, Mechanical Engineering, Nursing, Psychology, Quantity Surveying and Music.

“We are thrilled with this result after what has been a challenging year as we said goodbye to our old building. We look forward to the future – both in our new building, and with our colleagues in Acting in the new Birmingham Conservatoire.”

With a history dating back to 1859, the Conservatoire is one of the leading music academies in the country, being the third highest ranked UK conservatoire for music in the Guardian University Guide 2018. Birmingham Conservatoire is currently preparing to move to a new state-of-the-art £57 million home in September, which will include five public performance spaces and 100 practice rooms.

“We are delighted that, in the 2017 Postgraduate Taught Experience Survey, both Music and Acting have scored over 90 per cent for overall satisfaction with the quality of our courses. Such results draw attention to our extremely strong provision at this level in both areas.”