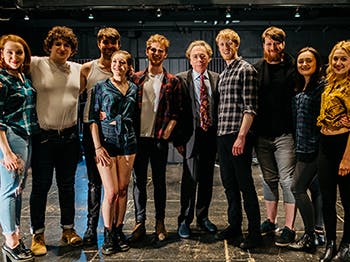 Birmingham City University's Royal Birmingham Conservatoire is delighted to announce that the Andrew Lloyd Webber Foundation has generously agreed to fund a scholarship commencing in the 2018/19 academic year.

The scholarship, which will be called the ‘Andrew Lloyd Webber Foundation Scholarship at Royal Birmingham Conservatoire’, will support an undergraduate student on the BA (Hons) Acting course. It will cover the successful applicant’s full course fees over the next three years, and will be awarded on the basis of both financial need and merit, particularly singing ability.

We would like to thank the Andrew Lloyd Webber Foundation for this incredibly generous scholarship, which will help us to continue attracting the most gifted actor-singers, irrespective of their financial circumstances.

Acting at the Conservatoire

In addition to the BA (Hons) Acting, the School also offers foundation courses, short courses, and undergraduate degrees in the associated disciplines of Stage Management and Applied Theatre, as well as taught postgraduate courses in acting and professional voice practice.

The Andrew Lloyd Webber Foundation was set up by Lord Lloyd-Webber in 1992 to promote the arts, culture and heritage for the public benefit.

In 2010, the Foundation embarked on an active grant-giving programme and has now awarded grants of £19M to support high-quality training and personal development as well as other projects that make a real difference to enrich the quality of life both for individuals and within local communities.

Speaking on behalf of the Foundation, David Grindrod said:

I’ve been impressed with the excellent training in actor musicianship at Royal Birmingham Conservatoire and the quality of their graduates. I am delighted the Andrew Lloyd Webber Foundation is supporting a scholarship there, widening access to the arts for talented young people who wouldn’t otherwise be able to participate.

Earlier this year, Lord Lloyd-Webber visited Royal Birmingham Conservatoire ahead the college's Royal Opening Gala Concert, where he spent time with Acting students who performed a sequence from rock musical 'Bloody Bloody Andrew Jackson' for him.