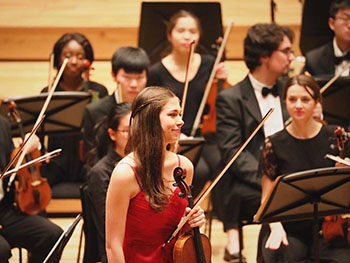 A US teenager has landed a recording contract after winning a global music competition at Birmingham City University’s new £57 million Royal Birmingham Conservatoire.

Eighteen-year-old Emma Wernig from Los Angeles came first in the second Cecil Aronowitz International Viola Competition and Festival, which was held at the UK music and drama academy between Saturday 18 and Friday 24 November.

Currently studying at the Colburn Conservatory with Scottish violist Paul Coletti, Emma Wernig has previously taken part in the Heifetz International Music Institute summer programme for talented musicians – held over six weeks at Mary Baldwin University in Staunton, Virginia, USA – and the three-week International Musicians Seminar (IMS) Prussia Cove, which takes place annually at Porth-en-Alls, Cornwall, UK. An alumna of Mirman School, Emma has a number of competition successes to her name already, both as a soloist and a chamber musician.

“I had a wonderful time in Birmingham at the Cecil Aronowitz International Viola Competition and Festival. Preparing so much repertoire and getting the opportunity to perform all of it was invaluable. 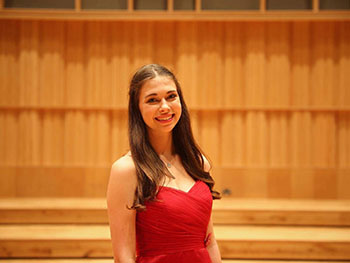 “Everyone was so kind and helpful at the Royal Birmingham Conservatoire, making the experience feel truly like a concert opportunity rather than a competition. My performance in the final was my first time performing with an orchestra and I couldn’t have asked for a more positive one!

“I was so happy to be able to play and perform in such beautiful spaces at the Royal Birmingham Conservatoire and I very much look forward to returning!”

Hosted in conjunction with the Arts Council of England, British Viola Society and Birmingham Services for Education, the competition is named after acclaimed South African violist, Cecil Aronowitz.

As well as being a leading chamber musician and long-term collaborator with Benjamin Britten, Cecil was a founding member of the Melos Ensemble and taught at both the Royal College of Music and, later, at the Royal Northern College of Music. Cecil’s wife, Nicola Aronowitz, was a member of the jury for the competition, which also included Ettore Causa, Robin Ireland, Thomas Riebl and Thomas Selditz.

Lara Albesano, aged 21 and from Italy, was awarded the Lionel Tertis Prize of £3,000 for finishing in second place, while third place was bestowed upon 18-year-old Parisian Sáo Soulez Larivière, who secured the Gwyn Williams Charitable Trust For Young Viola Prize of £1,000.

Elsewhere, Royal Birmingham Conservatoire student, Yue Yu, aged 20 and from Shenzhen, Guangdong, China, won the award for Best Sonata from her third round performance of York Bowen’s ‘Viola Sonata No. 1 in C Minor’ (1905). Her prize was a Pierre Guillaume viola bow from Sean Bishop worth £5,000. Twenty-year-old Silas Zschocke from Karlsruhe, Germany completed the line-up of finalists. 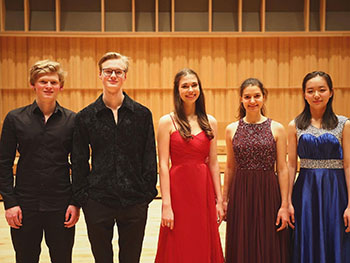 Dr. Louise Lansdown is Head of Strings at the Royal Birmingham Conservatoire. She said:

“The young global talent on display as part of this Competition was phenomenal and we were blown away at every round. Alongside creative flair we were impressed with the performers professionalism and stamina; the five finalists themselves performed 10 concertos on the last day alone, which is certainly the musical equivalent of a marathon!

“Emma Wernig’s lustrous, rich viola sound resonated throughout the competition complimenting her mature and breathtaking interpretation of everything she chose to play. She is without a doubt a star in the making and we are utterly thrilled to play a part in the launching of her wonderful career. I’m quite certain Cecil Aronowitz would have loved the essence of Emma’s all-encompassing musicianship!”

Performers came to the UK for the semi-finals from as far afield as Austria, China, Germany, Italy, Japan, Netherlands, Poland, South Korea, Spain, Switzerland and the USA, ahead of the final on Friday 24 November in The Concert Hall at the Royal Birmingham Conservatoire.

Organisers also offered a series of events to run alongside the competition that immersed hundreds of children from Birmingham schools in workshops across the city, UK conservatoire students in masterclasses, public recitals from jury members and displays from luthiers.

Furthermore, as the first purpose built conservatoire in the UK since 1987, the new institution which opened in September this year is the only one of its kind in the country designed for the demands of the digital age.