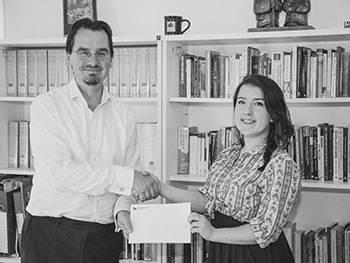 A Birmingham student is celebrating after winning a prestigious £2500 prize for her play, ‘The Little Creepers’, based on her own experiences of mental illness.

Charlotte Bell, who studies Applied Performance at Birmingham School of Acting, has been awarded the Ede & Ravenscroft Prize for academic excellence and hopes to soon showcase her work on stages across the UK and in West Midlands schools.

20 year-old Charlotte, who lives in Edgbaston, said: “’The Little Creepers’ is a play that I have written about the trials and tribulations of a teenage schizophrenic and it is inspired by my own personal suffering of psychosis and depression, highlighting the struggle that I have had with the stigma of psychotic illness.”

“The teaching at Birmingham School of Acting, part of Birmingham City University, has inspired me to believe in my ability for quality creative writing.”

Peter Wynne-Wilson, course director of Applied Performance at Birmingham School of Acting, said: “Charlotte is a remarkable student.  She has had more to deal with than most of us, but she has found a way not only to cope with her challenges, but to use them to drive her writing.

'Little Creepers’ is very funny and dry, and at the same time shocking and genuinely original.   Our course is partly about finding new voices, and ways of making them heard.  Charlotte’s is a strong new voice, and she will certainly be heard.

Birmingham School of Acting graduate Daniel Anderson is also addressing the topic of mental health in a short film he has written and directed, being screened at The Custard Factory on Friday 25 November as part of Birmingham Film Festival.

Daniel’s film, ‘From Noya’, follows the story of a troubled soul, whose fight to overcome her mental health issues becomes a matter of life or death.