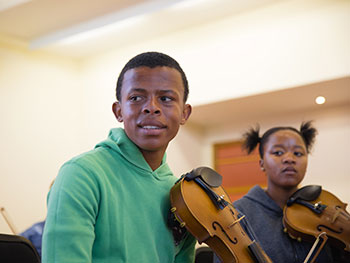 Three teenagers from a deprived township in South Africa are travelling to Birmingham to open a prestigious international viola competition.

Kwanda Buthelezi (violist, aged 13), Mbali Phato (violinist, aged 12) and Njabulo Nxumalo (violinist, aged 17) from Soweto in Johannesburg will be the focus of the first event in the Cecil Aronowitz International Viola Competition and Festival, being held at Birmingham City University’s new Royal Birmingham Conservatoire between Saturday 18 and Friday 24 November.

The students journey to the UK has been made possible thanks to a collaborative UK-South Africa project, Cape Gate MIAGI Centre for Music & Royal Birmingham Conservatoire – or ARCO, which is also the name for the technique of playing a stringed instrument with a bow.

ARCO has seen 24 strings students aged between eight and 17 in South Africa selected to participate in weekly instrumental Skype lessons, given by academics, current students and alumni of the Royal Birmingham Conservatoire.

ARCO aims to provide the benefits and life changing inspiration of music to children in the most deprived of circumstances. As well as providing transformative music education activities, Conservatoire staff and students have been acting as role models for vulnerable youngsters living in Soweto, a township deeply affected by poverty and a dearth in cultural activity and opportunity.

For the last two years, the Cape Gate MIAGI Centre for Music has hosted an annual ARCO Festival in Soweto, featuring public concerts by the Royal Birmingham Conservatoire, intensive individual tuition, instrument-specific classes, quartet lessons and listening classes. However, the upcoming concert in Birmingham will inaugurate the project’s latest initiative, ARCO Exchange, which has funded the trip that is enabling the three students to fly to the UK this week.

The concert at the Royal Birmingham Conservatoire on Saturday 18 November marks the beginning of the teenager’s two-week visit and will see them perform works by Dvorak, Händel and Küchler, as well as speak about what ARCO means to them. 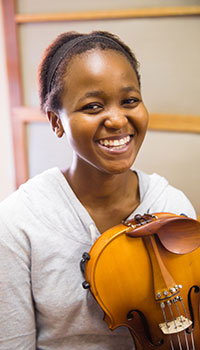 “I have learnt so much from the ARCO project so far and there's still so much more to learn. I would really like to thank my family, for their constant support; my Skype teacher Matt; Ma’am Olga at the Cape Gate MIAGI Centre for Music; my role model and viola teacher, Tiisesto Mashishi; and last but not least, God. I will always be thankful until the day after forever for this incredible opportunity.”

The three students have never travelled outside South Africa before; it was only last month that they got a passport for the first time.

“I can't wait to fly to England for the first time in my life. I am looking forward to seeing all of my teachers from Birmingham once again. I am also really excited to see some of the professional musicians who are coming to Birmingham for the Cecil Aronowitz Competition and Festival.”

Alongside Conservatoire Principal, Professor Julian Lloyd Webber and Professor Philip Plowden, Vice-Chancellor of Birmingham City University, Head of Strings at the Royal Birmingham Conservatoire, Louise Lansdown – who initiated the ARCO project in 2015 – will discuss the success of the UK-South Africa partnership during the inaugural concert.

“The students will be opening our major international viola competition named after one of South Africa’s greatest violists and I know he would be immensely proud of what the youngsters from Soweto have achieved as part of their studies with ARCO. We are delighted that, along with many distinguished guests, Cecil’s wife, Nicola Aronowitz, will be here to enjoy the student’s performance.

As a University, we are proud of our ambitious widening participation programme, with over forty-five per cent of our students coming from low income households, and with ARCO, we are expanding these efforts on a truly global scale.

“I would personally like to thank Birmingham City University, the South African Quartet of Peace Trust, the Gwyn Williams Charitable Trust For Young Violist and all the fundraisers who have made the ARCO project, and now this Exchange, possible.” 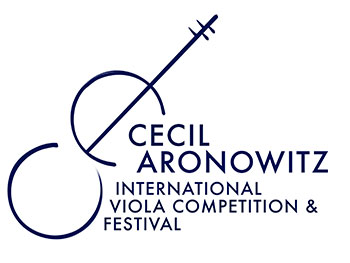 The second Cecil Aronowitz International Viola Competition will see 26 young violists aged 21 and under representing 20 nationalities as they compete for the overall Cecil Aronowitz Prize of £5,000, a recording contract with Champs Hill Records and several high profile recitals as part of the Royal Birmingham Conservatoire’s Concert Series.

Performers will be coming to the UK for the semi-finals from as far afield as Austria, China, Germany, Italy, Japan, Netherlands, Poland, South Korea, Spain, Switzerland and the USA, ahead of the final on Friday 24 November in The Concert Hall at the Royal Birmingham Conservatoire.

Hosted in conjunction with the Arts Council of England, British Viola Society and Birmingham Services for Education, it is the first major competition to take place in the Conservatoire’s new £57 million home.

Organisers have also planned a series of events to run alongside the competition that will immerse hundreds of children from Birmingham schools in workshops, UK conservatoire students in masterclasses, public recitals from jury members and displays from luthiers.

Furthermore, as the first purpose built conservatoire in the UK since 1987, the new institution which opened in September this year is the only one of its kind in the country designed for the demands of the digital age.