Sounds to echo across Birmingham at new library launch 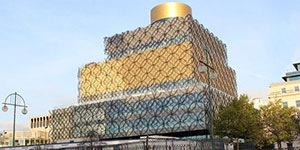 A mass of brass players from across the West Midlands are to mark the official opening of Birmingham's brand new library next week with a large-scale performance at the £188 million facility.

'Together We Breathe', an innovative take on the traditional fanfare created by Australian sound artists Super Critical Mass, will bring together local brass players of all ages and backgrounds to set the tone for the Library of Birmingham - Europe's largest civic building.

Musicians including staff and students from Birmingham Conservatoire, part of Birmingham City University, will be positioned throughout the library on Tuesday 3 September and fill the air with sound as visitors are invited to wander on a journey of discovery through the new building and its state-of-the-art facilities, revealing the Library's collections and resources.

Zoe Poyser, Orchestral Manager at Birmingham Conservatoire, said: "We're delighted to be involved in such an innovative fanfare to mark the opening of the new Library of Birmingham.

"Following an inspirational workshop with the sound artists from Super Critical Mass, we soon extended the call for participants to the whole of Birmingham City University, inviting any of our staff and student brass players to get involved and perform alongside a wide range of local musicians.

"'Together We Breathe' should prove to be a great experience for visitors as the musical and visual impact encourages them to explore the new building."

Other performers at the Library's opening event include young musicians from local schools and colleges as well as City of Birmingham Symphony Orchestra (CBSO) ensembles.

Filmed footage from the 'Together We Breathe' project is due to feature on BBC's 'The Culture Show' on Wednesday 11 September.

More information is available from the Library of Birmingham.