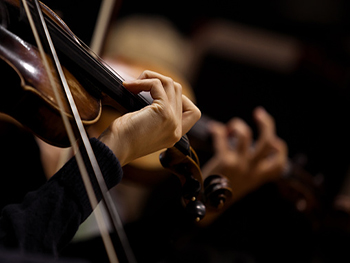 More than 250 young musicians from Solihull will perform a new piece of music inspired by the words of US President, Barack Obama, during an upcoming celebration concert at Birmingham’s Symphony Hall.

The new work – composed by Birmingham Conservatoire postgraduate student Chris Cresswell, with input from the young performers – is called ‘Just Imagine’ and is based on a speech Obama gave to graduating students in Moscow in 2009.

Birmingham Conservatoire, part of Birmingham City University, has been working with Solihull Music Service, 14 secondary schools and six primary schools ahead of its premiere on Monday 7 March at Symphony Hall. The youngsters, collectively known as the Orchestra of the Schools of Solihull, will also be performing five works from the BBC Ten Pieces initiative, including classics by Beethoven, Mozart and Wagner.

BBC Ten Pieces is a national initiative for primary and secondary age students. Its aim is to open up the world of classical music to a new generation of children and inspire them to develop their own creative responses to ten pieces of music. The arrangements of the works chosen enable mixed-ability groups to perform together.

With the constant pressure on secondary schools to focus on English Baccalaureate (EBacc) subjects, this project proves that through partnerships with the higher education sector, music hubs and schools, life changing musical opportunities can still be achieved.
Julian Lloyd Webber

“The concert itself will provide a wonderful platform for all the young musicians to share their achievements with their families and friends.”

The BBC Ten Pieces project also marks the first outing for the Conservatoire’s new Learning and Participation ensemble, which features 15 undergraduate and postgraduate students who have a strong interest in pedagogy and inspiring young people.

During January and February, the ensemble have been working in secondary schools coaching young players of varying abilities to perform Bernstein’s ‘Mambo’, Mozart’s ‘Horn Concerto’, Wagner’s ‘Ride of the Walkeries’, Beethoven’s ‘Fifth Symphony’ and Bizet’s extracts ‘The Toreador’s Song’ and ‘Habenera’ from his opera ‘Carmen’. The ensemble will perform alongside the Solihull youngsters during the Symphony Hall concert.

The work with Solihull Music Service forms part of the Conservatoire’s wider Learning and Participation programme, which aims to engage talented young musicians from diverse backgrounds in high quality musical experiences. As well as arts organisations such as Solihull Music Service, the programme sees the Conservatoire work with schools and charities, both locally and nationally.

“Birmingham Conservatoire is committed to developing partnerships such as these with local arts organisations – providing new and inspiring experiences for young performers.

“The concert we are planning with Solihull Music Service is an example of how schools in very different localities can come together using music as a tool for engagement and social and cultural change.

“This is the first time that this type of event has taken place in Solihull, and we hope it will raise the profile of music in local schools there, strengthen partnerships between schools and Solihull Music Service and inspire pupils to continue with their music making.”