Social action through music at heart of European youth event 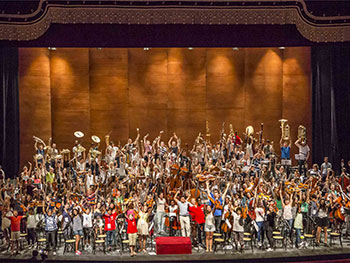 Birmingham City University’s Royal Birmingham Conservatoire and social development organisations Sistema England and Sistema Europe are welcoming 200 musicians from across Europe to the UK this summer for a celebration of social action through music.

Now in its fifth incarnation, the SEYO Summer Residency – comprising 200 youngers aged 10 to 21 years old, and 50 teachers from 22 Sistema programmes in 17 countries – will celebrate the power of music to unite nations, cultures and young people during challenging times for the UK and Europe.

The SEYO 2018 Summer Residency is the first residential summer course to be held in Birmingham City University’s new £57 million Royal Birmingham Conservatoire, and 30 students, teachers and staff from the music college will also be on hand to help make the event a success.

The event will take place between Saturday 18 and Tuesday 28 August and will also see the involvement 400 children from local ‘music for social action’ projects including In Harmony Telford, The Nucleo Project (London) and the Sistema England Young Leaders.

SEYO18 has a special focus on teacher development, and as part of a shared commitment to teaching excellence, Sistema England and Royal Birmingham Conservatoire are creating a teacher training Fellowship for outstanding Conservatoire students that will also run concurrent to the Residency.

Performances at London’s iconic Queen Elizabeth Hall and Birmingham’s majestic Symphony Hall will capture the unique spirit of the global Sistema movement, as well as the legacy of composer, conductor, educator and humanitarian Leonard Bernstein, as part of the worldwide celebrations marking what would be his 100th birthday. The Residency will also champion contemporary composers, with star violinist Nicola Benedetti joining for a closing performance at Symphony Hall in Birmingham, when she will perform the riveting final movement of Wynton Marsalis’ Violin Concerto, written for the artist.

Exciting collaborations with Birmingham City University staff and students from its Faculty of the Arts, Design and Media will also champion young creative talent in Birmingham, with students leading on virtual reality film creation, T-shirt design and photography curation, as well as PR and social media campaigns.  This feeds into the overall theme of SEYO 2018 – ‘Youth Ownership’.

“Royal Birmingham Conservatoire is thrilled to welcome young musicians and teachers from Sistema Europe Youth Orchestra 2018 to Birmingham to make music together in our new state-of-the-art Conservatoire building.

This magnificent and extraordinary international cultural collaboration proves once again that music has no barriers of language or politics, and we are proud to join forces with Symphony Hall in August to give a platform to this unique orchestra that will represent the vital Sistema movement in Europe.

The SEYO Summer Residency is an annual event organised by Sistema Europe, the network of European programmes inspired by the Venezuelan ‘El Sistema’, founded 44 years ago in Venezuela by José Antonio Abreu. Previous editions have taken place in Salzburg (2013), Istanbul (2014), Milan (2015) and most recently Athens (2017). 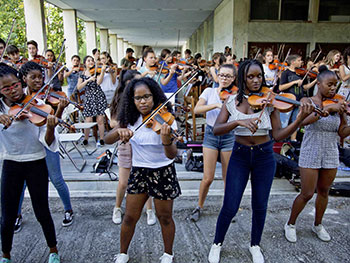 “At Southbank Centre, we share Sistema Europe’s belief that making music changes lives, and we are delighted to be welcoming young musicians from all round Europe and the UK to celebrate, perform together and learn from each other.

“The music they will play is by composers who share this belief too with their generous and inclusive approach to music, composers such as Errollyn Wallen, Gustav Holst and, in his centenary year, Leonard Bernstein. I know that this gathering will make a real difference and I'm so very pleased that it will happen here.”

“Through SEYO we want to flip the script, showing everyone that what makes us amazing and unique is our ability to give people unforgettable musical experiences through our personal struggles, not despite them.

“Sistema programmes in Europe may face different social situations but we have a strong bond in knowing that we’re with young people who are aiming for something more than what society expects of us. The inspiration we get from our fellow musicians in other countries fires us up with more motivation to push beyond what we believe to be our personal limits.”