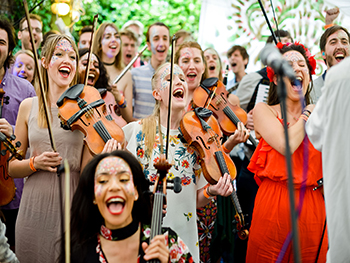 A sixty-strong band of Birmingham-based young musicians are to perform at the European Parliament in Brussels on Tuesday 8 October in a bid to highlight their concerns around Brexit and the climate change crisis.

The acclaimed Joe Broughton’s Conservatoire Folk Ensemble, comprising of music students from the Royal Birmingham Conservatoire at Birmingham City University, will wow an audience of MEPs, media, parliament staff and campaigners in the Yehudi Menuhin Space, delivering the biggest live music performance in the landmark’s history in the process.

The mega-band, a staple of the British contemporary folk scene, are renowned for their energetic, rousing and musically diverse shows at venues, festivals, and concert halls, as well as capturing the public’s attention in more unlikely spaces such as major railway stations, shopping centres and derelict buildings across the UK. Combining traditional folk melodies, styles, reels, ballads and song with contemporary influences from heavy metal to classical, drum and bass to Arabic, the Ensemble produce an incredible and unmatched live music experience.

Designed to celebrate the diversity and creativity of the West Midlands, and highlight UK citizens’ multi-layered identities, the Not Leaving Quietly concert is the brainchild of West Midlands Ellie Chowns MEP, who invited Joe and the group to play after seeing them live.

For the last 22 years I have been welcoming students into the Folk Ensemble who originate from all over the world, and witnessing the power of their musical collaborations. I have seen, in such a blindingly graphic way, the benefits of people working together who have different life experiences, different cultures and different creative visions. Our British musicians are not outsiders in this process; they are creative, inspired and forward-thinking. We all thrive on new ideas and new input, wherever those inspirations may come from. Through our music, I want to send a strong message to our European friends that we are Not Leaving Quietly because we make a better noise together.”
Joe Broughton, violinist and bandleader

The Not Leaving Quietly concert will also feature a special guest: inspirational youth activist Femi Oluwole, co-founder of Our Future Our Choice, who grew up in the West Midlands, alongside young environmental activists from across the region, and will also draw attention to the potential issues faced by musicians and music industry professionals working between the UK and Europe in a post-Brexit world.

Ellie Chowns MEP explained her vision for the concert, saying “This amazing band embodies the idea that the whole is greater than the sum of its parts.  That seems a very appropriate message as the UK considers its future path. I agree with these young people: to face the big challenges we need to be working together with our European friends and neighbours to tackle the climate crisis, create jobs, protect nature and much more. These young people have an inspiring vision for the future of the UK: open, inclusive, diverse, creative, and positive.  I think we should listen to them more!”

Speaking ahead of the performance, Professor Julian Lloyd Webber, Principal of Royal Birmingham Conservatoire, said, “The ensemble, led by the ever energetic Joe Broughton, are a wonderful representative for Royal Birmingham Conservatoire at home and abroad. Over a number of years, with our full support, they have earned an exceptional reputation as a powerhouse of composition and performance, and we are delighted they will be introducing their spectacular show to European audiences – particularly given a number of the band hail from the continent. Joe Broughton’s Conservatoire Folk Ensemble encapsulate much of our work here – innovation, creativity, internationalism and family.”

The Not Leaving Quietly concert is at 7pm, Tuesday 8 October 2019 in the Yehudi Menuhin Space, European Parliament, Brussels.