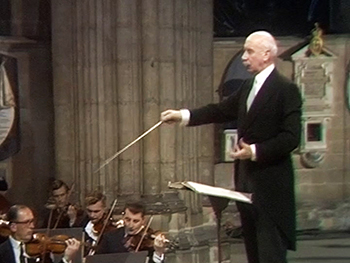 One of the first classical music performances to be filmed in colour will be screened ahead of the last ever concert in Birmingham's Adrian Boult Hall this weekend.

The recording of Sir Edward Elgar's ‘The Dream of Gerontius’, conducted by Sir Adrian Boult, has remained hidden in archives for nearly 50 years.

Footage from this rare film will be shown on Sunday 26 June to mark the closure of Birmingham Conservatoire's 520-seat auditorium – and named after the great English conductor.

As was the case during the early days of filming for colour television, the recording suffered several stoppages when cameras broke down and there was also the added difficulty of Canterbury Cathedral’s organ being disabled. A link to a nearby parish church was arranged and, with the help of a closed circuit television, the organist could participate in the performance being filmed in the Cathedral.

"During Sir Adrian Boult’s long and distinguished life he became a supreme interpreter of much of Elgar's music winning accolades and awards for performances and recordings. Contrary to the opinion that Elgar was neglected after the composer’s death, Boult championed his music throughout his conducting life notably during his tenure as Director of Music at the BBC.

He was long associated with performances of ‘The Dream of Gerontius’ and there are excerpts available from a broadcast performance in 1936 that show his conception of the work, once settled, changed little over the intervening 32 years before this film was made. Broadcast on Easter Sunday, 14 April 1968, Boult’s verdict was that ‘…the production is a milestone whence television technique can move in a fresh direction’.

Adrian Boult Hall, often described as one of the best concert halls of its size in the country, was opened in 1986 by HRH the Duchess of Gloucester. Since then, it has welcomed diverse performances from well-known names such as violinists Nigel Kennedy and Tasmin Little, Conservatoire Principal and cellist Julian Lloyd Webber, singer Dame Felicity Lott and composer Pierre Boulez.

The Hall is the next in a series of buildings being demolished as part of the £500 million Paradise regeneration project in Birmingham, which has already seen the loss of the brutalist Central Library.

Birmingham Conservatoire, part of Birmingham City University, is now preparing to move to its new £56 million home in the Eastside region of the City, currently under construction and due to open in 2017.

Between the closure of the Adrian Boult Hall and the new building opening, Birmingham Conservatoire will be presenting a full programme of concerts in its Recital Hall, as well as at partner venues across the City including Town Hall, Symphony Hall, Elgar Concert Hall – Bramall Music Building (University of Birmingham), CBSO Centre, St Philip’s Cathedral, St Paul’s Church and the Rep Studio Theatre.

The closure of the concert venue has been marked with the festival ‘City of Sounds – Saying Goodbye to Birmingham Conservatoire’s Adrian Boult Hall’, in conjunction with Greater Birmingham Chambers of Commerce.

The festival opened on Sunday 1 May with a celebrity recital from world famous musicians Sir James and Lady Jeanne Galway and closes on Sunday 26 June with Birmingham Conservatoire Symphony Orchestra and Chorus performing Verdi’s ‘Requiem’ conducted by Sir Richard Armstrong – which will also be broadcast on Tuesday 28 June on BBC Radio 3.

Adrian Boult Hall has been at the forefront of Birmingham's cultural life for the past 30 years. ‘City of Sounds’ has allowed us to celebrate this with high profile performances over the last two months, climaxing in what promises to be one of the most talked about concerts of the year on Sunday by Birmingham Conservatoire Symphony Orchestra.
Professor Julian Lloyd Webber, Birmingham Conservatoire Principal

"Although we are saying goodbye to the Adrian Boult Hall this weekend, it is also the perfect signpost for what’s to come. The new Birmingham Conservatoire will be the first of its kind purpose-built for the digital age and, along with a replacement for the Adrian Boult Hall, audiences will be able to enjoy Birmingham’s only dedicated jazz venue."

Immediately prior to the final concert, journalist, former Conservatoire tutor, Birmingham School of Music alumnus and Honorary Fellow of Birmingham Conservatoire Christopher Morley will be in conversation with renowned conductor Barry Wordsworth to discuss his time studying with Sir Adrian Boult. Unremastered footage from ‘The Dream of Gerontius’ performance in 1968 will accompany this interview.

The film itself will receive a long-awaited double-DVD release in October this year by ICA Classics who are currently cleaning, restoring and digitally remastering the original recording with support from the Sir Adrian Boult Trust, the Elgar Society, and the Elgar Birthplace.

Except from the film