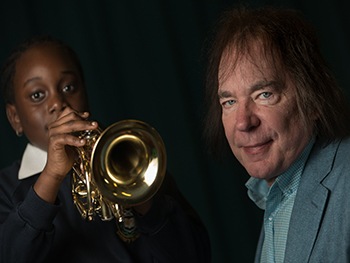 Primary schools across the country are invited to compose an original piece of music as part of a competition launched in conjunction with Shakespeare Week.

The Composition Competition, organised by the Shakespeare Birthplace Trust in collaboration with Birmingham Conservatoire, invites schools to create a musical masterpiece in celebration of Shakespeare Week, which this year has a music theme.

Children can create a soundscape for the Forest of Arden, a lullaby inspired by the fairies from ‘A Midsummer Night’s Dream’ or a magical melody for the witches of ‘Macbeth’ – in any musical style or genre. Birmingham Conservatoire, part of Birmingham City University, has developed a bank of resources to help schools with their musical masterpieces.

Entering is easy. Children should compose a piece of music inspired by Shakespeare’s plays and characters lasting no longer than four minutes, and submit an MP3 recording along with any lyrics by Friday 28 April.

Five winning entries will be chosen to participate in a musical workshop and perform a professionally arranged version of their composition alongside musicians from Birmingham Conservatoire at a celebration concert on 21 June. For details and terms and conditions, see www.shakespeareweek.org.uk/competitions.

“Birmingham Conservatoire is committed to developing partnerships – such as this one with Shakespeare Birthplace Trust – which allows us to provide new and inspiring experiences for young performers, with music acting as a tool for engagement, as well as social and cultural change.

“Shakespeare is intrinsic to our shared history, but can often be difficult to access at such a young age. Working with the Shakespeare Birthplace Trust, we are able to introduce the Bard’s wonderful stories in a unique and creative way that will enhance cultural understanding among primary school children.

Five winning entries from our Composition Competition will have the opportunity to perform a specially arranged version of their composition alongside musicians from Birmingham Conservatoire in June and, in the meantime, we can’t wait to hear what schools up and down the country prepare for us to listen to.

Shakespeare Week was launched by the Shakespeare Birthplace Trust in 2014 as a way to share and celebrate Shakespeare’s work, life and times with every primary school child in the country. Now in its fourth year, Shakespeare Week 2017 provides teachers, home educators and families with free resources and ideas to teach Shakespeare across all subjects in the national curriculum including numeracy, geography, and computing.

Shakespeare Week has also gone digital with ‘Mission Shakespeare’, a free online interactive challenge for children to take their Shakespeare learning beyond the classroom.