Shakespeare and Tarantino come together for unique film adaptation of ‘Macbeth’ 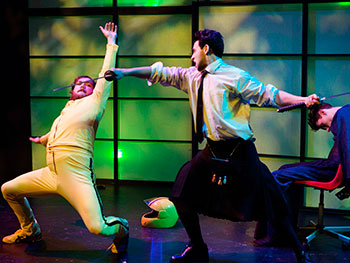 What if Tarantino had written ‘Macbeth’ – and then made it in to a film?

Shakespeare's timeless, blood-soaked tale of murder, lust and power is to get a modern movie makeover later this year, as filming takes place in Birmingham on a reworking of the tragic play that plays homage to some of director Quentin Tarantino’s best-loved films.

In order to make the film a reality, the producers have launched a crowdfunding campaign that has already received financial backing from revered actor Sir Ian McKellen.

‘Macbeth – Kill Bill Shakespeare’ is an irreverent and imaginative take on one of the world’s most famous plays, with the production staying true to the original text. However, the images and style of ‘Reservoir Dogs’, ‘Pulp Fiction’ and ‘Kill Bill’ will collide violently on screen with Shakespeare's verse, creating an exhilarating black comedy.

The cast will be made up of graduates from Birmingham School of Acting, who starred in the stage version that proved a hit with audiences in Birmingham earlier this year and commemorated 400 years since the death of William Shakespeare.

Birmingham School of Acting, part of Birmingham City University, will also supply costumes, sets and props for the upcoming shoot.

Macbeth's descent into madness, his relentless pursuit of his own destruction fuelled by paranoid fantasies of power and betrayal, find poignant echoes in the violent world inhabited by Tarantino's gangsters, drug dealers and deadly assassins. Underscored by a highly charged modern soundtrack, cinematic form and theatrical convention combine creating a movie that promises to be fast, furious, comic and provocative.

The film will be shot over 12 days in September this year in Birmingham City University’s £62 million Parkside Building, where the filmmakers will have access to the institution’s cutting edge facilities in its four studios, as well as Europe’s largest static green screen.

Although given a wide release, those behind the film will be targeting distribution among schools and universities around the world.

“This a fantastic opportunity to create a movie that will change the way young people look at Shakespeare and hopefully inspire them to explore his great works a little further.”

We believe that for younger audiences, the accessible nature of the project will have a wide-reaching appeal. Getting young people to appreciate Shakespeare, or indeed any classic, is a hard sell, but the enormous amount of positive feedback and reviews from the live shows means we’re on the right track.

“We all believe passionately in this project and feel that it can make a difference to the way Shakespeare is taught in schools and perceived by young people. Thanks to the support from Birmingham City University and Birmingham School of Acting, for a relatively small investment we can together create something that has mass appeal and is something we believe has never been done before.”

Malachi is no stranger to reworking classic works with a modern twist. In 2003, he wrote and directed ‘Bill Shakespeare’s Italian Job’ – which was performed at the Edinburgh Festival Fringe and as part of an international tour – as well as reworking Homer’s Greek epic ‘Odyssey’ as ‘From Ithaca With Love’. The latter was first performed in Birmingham in June 2006 to celebrate the opening of the city’s Millennium Point building – also home to Birmingham School of Acting – and now a film version is also in the works.

Birmingham School of Acting graduate Freya Sharp performed in the stage version of ‘Macbeth – Kill Bill Shakespeare’ as Malcolm, Fleance and Lady Macduff and will reprise the roles in the upcoming film version. She said:

“I enjoyed this project so much when it was a theatre piece, so I know it'll be even better when we make it into a film! It's so important for young people to keep interested in Shakespeare – he is such a big part of our history – therefore I am so excited to be part of a film that will grab the attention of them and hopefully keep them fully engaged and get them talking about it!

“It's also a really great stepping stone for me and my fellow cast mates – who are all Birmingham School of Acting graduates too – to have a professional job to look forward to after graduating this year. It's very rare that we'll all get to work together again in this same cast so this is a great opportunity to use it to our advantage and act as professionals, whilst being comfortable and playful around each other. Birmingham School of Acting has given me the skills and training, and now I just want to try it out in the real world!”