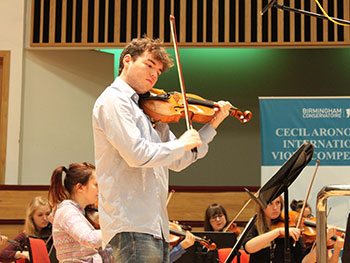 Taking place in November this year, it will also be the first major competition to take place in the Conservatoire’s new £57 million home, currently under construction in the Eastside region of Birmingham.

Performers will be coming to the UK for the semi-finals from as far afield as Austria, China, Germany, Italy, Japan, Netherlands, New Zealand, Poland, Russia South Korea, Spain, Switzerland and the USA.

“Twenty countries were represented across the competition entries and we are looking forward to welcoming gifted violists from across the globe to this unique event. Congratulations to all those who have progressed through to the semi-finals!

Birmingham Conservatoire moves to its brand new building in August and this competition will be the first major international event in the new premises. A star-studded jury will be in attendance, including Nicola Aronowitz, Ettore Causa, Florian Leonhard, Bruno Giuranna, Robin Ireland and Thomas Riebl.

Cecil’s wife, Nicola Aronowitz, is a member of the jury for this year’s competition. She said:

“We as a family were thrilled at the success of the first Cecil Aronowitz International Viola Competition and are delighted that the second one will be happening in 2017. Cecil – a supremely modest man – would have been truly honoured that a competition should be named after him. And yet if he thought about it, he would realise how fitting it is.

“He was one of the foremost viola players of this time but perhaps above all he was a source of inspiration to all those around him, whether players or pupils, amateurs or professionals, colleagues or audiences.

The Cecil Aronowitz International Viola Competition was open to all violists from anywhere in the world who will be aged 21 or under when the live rounds take place between Saturday 18 November and Friday 24 November.

Various prizes are on offer, with the overall winner being awarded the Cecil Aronowitz Prize of £5,000, a recording contract with Champs Hill Records and several high profile recitals as part of Birmingham Conservatoire’s Concert Series.