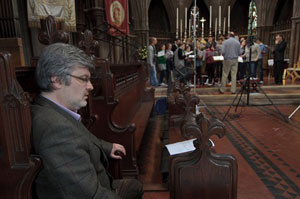 While the rest of the country was sleeping off its election hangover, Birmingham Conservatoire’s accomplished Chamber Choir was hard at work recording its second CD, featuring the works of James MacMillan, including some first recordings. The Scottish superstar composer visited Birmingham on Friday 7 May to listen to sessions and to work with the Choir.

Of the works, Leighton’s motet Quam dilecta! and his Missa Sancti Thomae, as well as MacMillan’s The Song of the Lamb, Invocation and Laudi alla Vergine Maria have not been recorded before. In fact, MacMillan had never heard The Song of the Lamb before working with the choir!

With MacMillan’s visit scheduled for the morning after the British general election, members of the Choir were under strict orders to abstain from alcohol and to go to bed early, rather than to stay up all night watching the election results. Their professionalism seems to have done the trick. After working with the Choir on the 7, James MacMillan (pictured, with the Choir) wrote to Paul Spicer: “Thank you for ... your wonderful preparation of the music last week. I was thrilled to hear what you had done. My deepest gratitude and appreciation to you and your young singers. I would be delighted to write something for your liner notes.”

The new CD has been recorded at St Alban’s Church, Highgate, which was also the venue for the Choir’s first CD, ‘To Music – An Anthology of English 20 Century Choral Music’. Released in 2008, the disc featured music by Finzi, Bainton, Howells, Vaughan Williams, Murrill, Armstrong Gibbs, Christopher Edmunds, John Joubert, Holst, Leighton and Dyson, as well as works by the Choir’s director Paul Spicer. The CD earned enthusiastic praise from the music press and helped to establish the Choir’s blossoming reputation.

Birmingham Conservatoire Chamber Choir’s second CD of MacMillan and Leighton will be available at the beginning of 2011 through Regent Records.