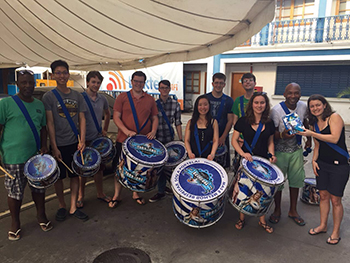 Students from Birmingham Conservatoire’s Percussion Department have travelled to Brazil to train with one of the country’s top samba schools.

The eight students have spent time at GRES Portela in Rio de Janeiro during their Easter break, as well as visiting a unique educational programme in the country’s north east.

GRES Portela is the most successful samba school in Rio de Janeiro, winning 21 titles in the city’s annual Carnival since 1932.

"Samba has become hugely popular here in the UK. As well as contributing to the development of hundreds of youth and adult percussion groups, the music has an infectious energy that creates or reignites lost feelings of community.

"However, Brazilian music, like most world music, can only be replicated so far in practice rooms. As Brazilian music is passed on from generation to generation aurally our students can only truly capture the complex feel and true essence of the music – as well as its cultural significance – by studying it first hand with the master musicians of Brazil in their own environment."

The students' first stop was the city of Salvador in the state of Bahia, where they visited a peer-to-peer learning initiative with the Bahia Orchestra Project – a pioneer initiative in Brazil modelled on the Venezuelan 'El Sistema' programme.

'El Sistema' aims to transform the lives of children in deprived communities through ensemble music making and Birmingham Conservatoire works in partnership with its UK equivalent, In Harmony.

While in Salvador, the students also performed alongside teachers of samba-reggae, which originates in Bahia. They also had lessons on music from Recife using the zabumba, a type of bass drum from the north eastern city.

The students have gained an invaluable experience and an eclectic range of skills through studying the music in its environment. This will significantly broaden their opportunities for leadership and employment
Sophie Hastings, Head of Drum Kit, Rhythm and World Percussion at Birmingham Conservatoire

"Peer learning is an invaluable tool and a transferable skill all our students can benefit from. They have gained an insight into new and challenging settings, experiencing and learning from students from a different culture, as well as being able to offer back their own knowledge through our own Learning and Participation programme back in the UK."

The exchange with GRES Portela Samba School is part of a longer term project that will see their Musical Director, Mestre Nilo Sérgio travel to Birmingham in the next academic year to continue his work with the Conservatoire students. The aim is to have a Conservatoire student join the elite GRES Samba Band for the Rio Carnival.

The department is also planning to have percussionists from the Bahia Orchestra Project spend time with the Percussion Department in the Conservatoire's new £56 million home from 2017.

George Kirkham was one of the eight percussion students on the trip. He said:

"Experiencing music in Rio de Janeiro was incredible, with engaging classes every day and then out to gigs in the evening. It reaffirmed my love for rhythm percussion and gave me lots of new ideas about how I can incorporate Brazilian beats into my own repertoire.

"Witnessing the social context of the music was just as important as learning it and I will never forget the Candomblé religious ceremony we witnessed in Salvador. Just seeing music performed everywhere was great and it has really inspired me to get out there and be involved with it as much as I can."

Birmingham Conservatoire is part of Birmingham City University, which already enjoys a successful relationship with GRES Portela. Staff from the samba school visited the University in 2014 and earlier this year, three Design for Performance students created costumes for GRES Portela's lead dancers that were worn in the samba finals prior to the recent Rio Carnival.