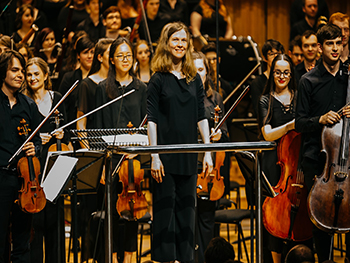 The official opening of the music and drama college’s brand new £57 million home was marked by a visit from HRH Prince Edward, The Earl of Wessex KG GCVO on Sunday 11 March.

Tickets for the Royal Gala Opening Concert went on sale in early January and sold out within days with viewers also tuning into a live stream of the performance in the Conservatoire’s adjacent Recital Hall.

“This evening's celebration is not just about the United Kingdom’s first purpose-built music college for a generation, but also a prefix which recognises the fantastic contribution this institution has made to music education over many years.

The past is merely the foundation for the next stage, when these unrivalled facilities will hopefully inspire students to greater achievements; which in turn will enhance Birmingham’s reputation as a vibrant centre in the world of music and can only lead to wider recognition and appreciation.
RH Prince Edward, The Earl of Wessex KG GCVO

The Earl of Wessex was announced as Birmingham Conservatoire’s first Royal Patron in 2016 when the college was based in the former Brutalist Paradise Place building. His decision to take up the role is a reflection of his great interest in the arts in both his public role and private life, and His Royal Highness regularly attends concerts and theatre shows associated with his patronages.

Meanwhile, following the completion of the new building in the Eastside region of Birmingham – and now part of its parent institution’s City Centre Campus – the Conservatoire was granted a Royal title by Her Majesty The Queen in September 2017.

Permission to use the title ‘Royal’ is granted by the Sovereign, acting on the advice of her Ministers. Following careful consideration, The Queen gave her personal approval to the name ‘Royal Birmingham Conservatoire’. The protected Royal titles are conferred sparingly, and all applicants must satisfy several strict conditions.

Along with pieces by Chopin (Piano Concerto No. 2) and Ravel (Suite No. 2 from ‘Daphnis and Chloe’) the Royal Gala Opening Concert featured the UK première of Cuirlionis’ ‘In the Forest’ with visuals, as well as the world première of Joe Cutler’s ‘Elsewhereness’.

Head of Composition at the Royal Birmingham Conservatoire since 2000, Dr Joe Cutler’s works have been performed in over 30 countries across six continents, and he has worked with the London Symphony Orchestra, the BBC Symphony Orchestra and the BBC Concert Orchestra to name just three.

“With our new home, Royal title and central location, I believe we are uniquely placed to inspired and nurture the next generation of performers.

“We want to use our facilities to continue attracting the finest tutors and most talented young musicians and actors that the world has to offer; we want to be able to reduce the financial pressures on our students by providing scholarships for those who need them; and we want to expand our outreach programmes in schools and communities across the country in order to build sustainable pipelines and pathways into a conservatoire education.”

The Royal Birmingham Conservatoire enjoys nearly 70 formal partnerships with some of the world’s most prestigious performing arts institutions, including the Franz Liszt Academy of Music in Budapest, the National Conservatoire of Music and Dance in Paris and the Shanghai Conservatory in China.