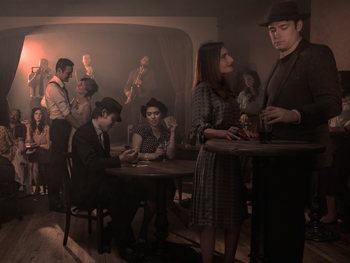 Productions include the first BAME casting of Patrick Marber’s award-winning ‘Closer’, Brendan Behan’s ‘The Hostage’ and a brand new revision by David Edgar of ‘Pentecost’, with the writer taking an active role in rehearsals.

Beginning on Wednesday 6 December at The Patrick Centre, Birmingham Hippodrome, Brendan Behan’s ‘The Hostage’ is a classic of the modern stage, a witty and often profound commentary on Anglo-Irish relationships.

A cockney soldier is held hostage in a Dublin lodging house with the intention to exchange him for an IRA man who is to be hanged in Belfast. Civic guards accidentally shoot him in a raid on the house. ‘The Hostage’ runs until Saturday 9 December.

A medieval art discovery in a dusty church with the potential to change history is at the centre of David Edgar’s 1994 work ‘Pentecost’. The prolific and highly-successful British playwright will return to his hometown of Birmingham to oversee the premiere of a newly-revised version of the play.

This politically-topical drama, set in Eastern Europe, sees armed and desperate migrants storm the church holding hostage the art historians who have come to study the fresco. A Serbian director and several Eastern European actors are among its diverse cast.

Edgar, who was born in Birmingham into the fourth generation of a theatrical family, has long associations with the Birmingham Repertory Theatre and the Royal Shakespeare Company. The cast also includes two members who have recently been awarded prestigious Laurence Olivier Bursaries. ‘Pentecost’ is at the Patrick Centre, Birmingham Hippodrome from Wednesday 13 until Saturday 16 December.

Patrick Marber’s multi-award winning play ‘Closer’ is a brilliant exploration into the brutal anatomy of modern romance where a quartet of strangers meet, fall in love, and become caught in a web of sexual desire and betrayal. Twenty years after it was first performed, Danièle Sanderson, Head of Undergraduate Studies, Royal Birmingham Conservatoire (Acting), has cast four actors to make this the first BAME production of this provocative work.

We have a strong sense of our responsibility to excite our students to their full potential through the entire training but also through the re-imagining of casting opportunities in new and classic plays. We are therefore excited to stage what we believe to be the first entirely BAME cast production of ‘Closer’.”
Danièle Sanderson

‘Closer’ was first staged at the National Theatre in 1997 and won the Laurence Olivier Award for Best New Play with the subsequent film earning BAFTA and Golden Globe awards for actors Clive Owen and Natalie Portman. Closer runs from Wednesday 13 until Satuday 16 December at the Crescent Theatre Studio.

Following its recent merger, Birmingham School of Acting is now part of the Royal Birmingham Conservatoire, a multi-disciplinary institution of music and acting which is part of Birmingham City University.

“Our Theatre Company has established a reputation as one of the city’s most exciting companies. The Company’s composition changes each year, so each season is highly eclectic, presenting a wide range of works – some challenging, some moving, some witty – but all with a freshness that comes from working with emerging professional actors.”

For more information and to book, visit our events calendar.