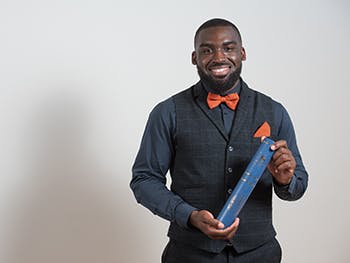 Students and graduates from Royal Birmingham Conservatoire will soon be travelling to Edinburgh to join thousands of performers and arts professionals for another year of explosive energy at the world’s largest and internationally renowned arts festival, The Edinburgh Festival Fringe.

The highly anticipated festival is a significant occasion for our actors, as it provides a unique platform to showcase their talent and develop their practice. Festival-goers will not only find our established graduates in shows and productions as part of the Fringe, but some of our most recent graduates and even some current students are heading to Edinburgh, in some cases with original shows they have written and produced.

The open-access festival has been providing opportunities for creative groups and individuals for over 70 years, and offers anyone with the desire to perform with an exceptional platform to do so. This year we have a particularly strong presence at the festival, with six current students and many of our graduates all performing throughout the three weeks at various venues around the city.

The Edinburgh Festival Fringe provides a major platform for both big name and emerging artists and collaborators from across the globe, and offers great exposure for new talent. The festival caters for everyone, and includes theatre, comedy, dance, physical theatre, circus, cabaret, children's shows, musicals, opera, music, spoken word, exhibitions and events.

Just some of the RBC representation in The Fringe programme this year includes:

Theo is a 17 year old biology student. Greg is a businessman with an odd sideline. When the two meet up in a hotel room, nothing is quite as it seems. A story of what a lonely boy will do for love.

Whilst We Were There

A once successful acoustic duo, which was at the top of their game, suddenly breaks up for reasons unknown. The circumstance at hand leaves Curtis at a crossroad – continue with the same musical identity or find another.

A foster kid’s journey to superstardom. Boxing is all Henry knows; relationships, money management and being a role model are hard lessons which he quickly learns, until he is left with nothing.

Inspired by the first man in America to plead Insanity as his defence, award-winning writer Camilla Whitehill and Strictly Arts examine the unspoken link between mental health and systemic racism.

Written and performed by Shobat Kadara (2018 graduate) with LUNG theatre

The story of a community torn apart by racial division, British Values and the culture of Prevent. Adapted from real-life testimonies of Muslim teachers and governors accused of plotting extremism in Birmingham schools.

A Fair Tale about a Fairy Trade

A musical adaptation of the classic tale of Cinderella, in which Cinderella ends up being trafficked and becomes a sex slave. Written by students at the Royal Conservatoire of Scotland.

Six young soldiers placed together in a hospital ward as they recover from injuries sustained in combat. Originally set in 1984, the updated version moves to 2010, in the aftermath of combat operations in Afghanistan in 2008/9.

Lewis is numbing himself in his video world. He sits in his chair no longer able to tell the difference between video and reality. What's real? What he sees becomes his reality with evocative and sultry dance-theatre.

Really Want To Hurt Me

A funny, painfully honest new play about growing up gay in the 80s. School bullies. Heartache. Dancing to Eurythmics and The Smiths on your Walkman to stay alive.

A unique insight into the minds of today's Instagram girl with useful advice on everything from what to do when you lose your skirt, to how to walk when you've taken too much Ketamine. And underpinning it all is the belief that it's never too early to start stalking your boyfriend.

The legendary Fringe hit is back again with their biggest shit-faced show to date: Hamlet. Featuring a cast of professional Shakespearian actors and a single, randomly selected drunk performer every night, no two shows are ever the same.

Acclaimed immersive adaptation of Irvine Welsh’s classic, staged in a unique tunnel beneath Edinburgh’s streets. The audience are literally part of the action, including the notorious ‘worst toilet in Scotland’ scene.