A long time ago in a Conservatoire far, far away…. 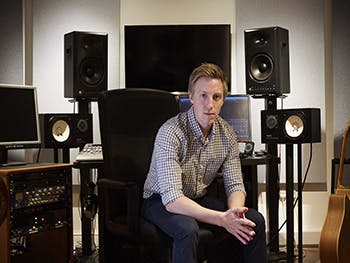 The Force is strong with one Birmingham Conservatoire graduate, after music he composed was selected for the latest ‘Star Wars’ film trailer.

Harry Lightfoot’s track ‘No Retreat, No Surrender’ features over a TV spot promoting ‘Rogue One: A Star Wars Story’, ahead of its UK release on Wednesday 14 December.

Harry, from Leamington Spa, studied BMus (Honours) Jazz at Birmingham Conservatoire from 2003 and graduated in 2007.

The music for the ‘Star Wars’ advertisement was recorded earlier this year at Abbey Road Studios with an 80-piece orchestra and 60-piece choir, and features vocals from Banbury singer, Valerie Vet.

Other film trailers that have used Harry's music include ‘Fantastic Four’ (Marvel, 2015) and ‘Tomorrowland’ (Disney, 2015).

“2016 has been a hugely exciting year for me. I got the opportunity at the start of the year to record some of my tracks at Abbey Road Studios. It was pretty overwhelming hearing my tracks brought to life by some of the best orchestral musicians in the world! These tracks are composed with film trailers in mind and they've already had a bit of interest.

“One of these compositions features over the trailer for Netflix's new series, ‘Lemony Snicket's A Series Of Unfortunate Events’, and more recently, ‘No Retreat, No Surrender’ was chosen for the latest ‘Rogue One: A Star Wars Story’ TV trailer.

Being a big Star Wars fan, that was an incredible surprise and I'm still getting over the shock! I've only just found out that Gareth Edwards, the director of ‘Rogue One’, is based in the Midlands too, so I'll have to be cheeky and try to get in touch!

Since graduating from Birmingham Conservatoire, Harry has worked on several major TV projects including ‘Millionaires’ Mansions’ (Channel 4), ‘The Fisherman’s Apprentice’ (BBC Twp), ‘Tales From The Wild Wood’ (BBC Four) and the critically acclaimed ‘Britain’s Big Wildlife Revival’ (BBC One). He has also created the sound design and music for BBC’s distinctive ‘Original British Drama’ and the ‘BBC Earth’ idents.

In film, Harry has recently composed the score to the acclaimed feature documentary ‘The Auction House: A Tale of Two Brothers’, which has made the official selection of many international film festivals.

Alongside this, Harry regularly composes for TV advertising, with clients including Adobe, Axe, Giffgaff, Harverys, Max Factor, Mercede, and Milka. Most recently, he provided the music for the 2016 McDonald’s Christmas advert – ‘Juliette the Doll’ – in the UK.

“I studied Jazz saxophone at the Conservatoire which is a pretty big step away from what I do now! Certainly studying the ins and outs of jazz harmony and musicianship gave me a great grounding to explore other musical worlds, and orchestral film music was always top of my list.”

‘Rogue One: A Star Wars Story’ is set shortly before the events of the original ‘Star Wars’ trilogy and follows a group of Rebel spies on a mission to steal design schematics for the Galactic Empire's new superweapon, the Death Star.

The film stars Birmingham-born actress Felicity Jones and sees the return of the franchise’s most famous villain, Darth Vader.

Listen to the full track by Harry Lightfoot, as featured in the 'Rogue One: A Star Wars Story' TV spot – ‘No Retreat, No Surrender’ – below.