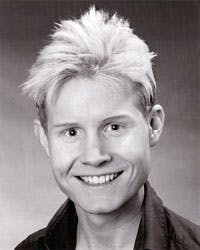 Rhydian Roberts, the classically trained 2007 X Factor finalist, is one of five outstanding graduates to be named in Birmingham City University’s end of year honours.

The University has named five Alumni of the Year 2010 with Rhydian being honoured in the Excellence in Sport or the Arts category. Rhydian graduated from Birmingham Conservatoire, which is part of Birmingham City University, with BMus (Hons) in 2007. After just missing out on winning ITV1's X Factor he went on to sell over 500,000 copies of his debut album, Rhydian. He released a second successful album, O Fortuna, in 2009 and his third is scheduled for release early in 2011.

The Welsh singer has performed live at a number of prestigious events including the Classical BRIT Awards and the Classical Response at the Royal Albert Hall. Television and radio appearances include Classic FM Live, Friday Night is Music Night Performance on Radio 2, guest on Susan Boyle's ITV1 Special and live on GMTV.

He is currently touring the UK and Europe in Jeff Wayne's 'War of the Worlds' starring alongside Jason Donovan and on 23 December will be starring in the Christmas Spectacular at the O2, London. Next year he will be playing the character Khashoggi in the jukebox musical of Queen songs, 'We Will Rock You'.

Alongside Rhydian, four other outstanding graduates have been selected as Alumni of the Year including Mark Persard (BSc Hons Management, 2005) who has been honoured for his work at Ingeus, an organisation which helps support disabled unemployed people back into work. Mark progressed to management level within Ingeus in two years (the average rate is 3.5 years) and now manages the Erdington office. The clients he works with are the long-term unemployed who have been out of work for between 5-10 years through physical and mental health issues. During this time he has helped over 650 people into work.

One of Mark’s referees said: “…neither of us had any family members that had ever been to University and that it was difficult for us, as young black males, to find many positive academic role models in our social network and in British business society itself. Mark…asserted that he wanted to be the first person in his family to go to University and…thus raise the bar of possibility for his sons, sisters and nieces and nephews to aspire”

Another graduate to receive the Alumni of the Year honour is Kerry Thomas (BA Hons Media and Communication, 1997, MA Media and Creative Enterprise, 2009) co-founder of trend-setting magazine Fused. Starting as a freely distributed regional magazine Fused is now distributed internationally and sold in shops and galleries in key cities. Quoted as ‘One of the Seven wonders of the magazine world’ and featured in design books across the globe Fused has worked with brands like Levi, Smirnoff, Bacardi, Ben Sherman, Virgin and many more to co-host a range of events. The Fused brand includes art, music and fashion events that span Europe and the States. Using some of the world's best designers and photographers the magazine has a cult following and a huge student readership.

In 2009 Kerry was placed number 41 in the Birmingham Post's Power 50 and was also chosen as one of the few women in the Insider Magazine’s 42 Under 42 awards.

The other two recipients are internal jeweller, Fei Liu (BA Hons Jewellery and Silversmithing, 2001) who was the first Chinese student to embark on a full-time course at the University’s School of Jewellery. Fei’s confidence and determination led him not only to gain his 2.1 degree, but also to start his own fine jewellery company in Birmingham in 2006, followed by success in New York, and Tokyo. In 2009, he opened his own flagship store in Beijing, the first UK jewellery designer to do so. This year he was listed in the Top 100 in the UK Jewellery Industry by Professional Jeweller and has won a host of awards including a Design Innovation Award (2009), International Jewellery London Editors Choice Award (2009), Goldsmith’s Award (2008), Kayman Award (First Prize 2007) and awards from the British Jewellery Association among others.

Finally, international photojournalist Justo Casal (LLM International Human Rights, 2006) has been honoured for his work in exposing human rights violations. He has worked with the UN and has lived, worked and volunteered in refugee camps in Kenya, Liberia and Guinea. He has also been published by the BBC and The New York Times and in 2009 CNN showed excerpts of a documentary he worked on about Female Genital Mutilation called The Cut. His motto is “Respect the human”; he believes that by promoting his work he is exposing human rights violations in remote places and enabling people to see what is going on in other areas of the world.

Birmingham City University vice chancellor, David Tidmarsh, said: Justo, Kerry, Mark, Fei and Rhydian are all exceptional ambassadors for the University; their stories are inspiring and their achievements outstanding. I very much look forward to meeting them when they collect their certificates at the upcoming Awards Ceremonies in January and February.”