RBC set for another strong year at the Edinburgh Festival Fringe 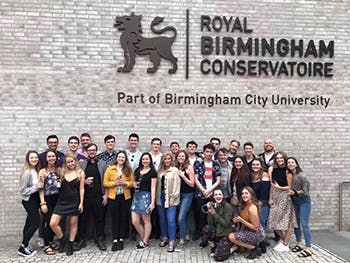 Actors trained at Royal Birmingham Conservatoire will soon be travelling to Edinburgh to join thousands of performers and arts professionals for another year of explosive energy at the world’s largest and internationally renowned arts festival, The Edinburgh Festival Fringe.

The highly anticipated festival is a significant occasion for our actors, as it provides a unique platform to showcase their talent and develop their practice. Festival-goers will not only find our established graduates in shows, but this year there is an unprecedented number of our most recent graduates appearing in productions, fresh from graduation. This year RBC will also be represented by three current students who have only just completed their first year of training!

‘Freeman’ – a production by theatre company Strictly Arts, which was founded by graduate and Honorary Member of RBC, Corey Campbell – was placed by ‘The List’ as the 13th best production at the 2018 Fringe, and it also received recognition in Mervyn Stutter’s ‘Spirit of the Fringe’ Awards, (known as The MERVs). Massively successful new musical ‘Six’, starring alumna Alexia McIntosh as Anne of Cleves, was named the fifth best production – Alexia has since gone on to be nominated for an Olivier Award for her role, along with the other 'Queens' (‘Best actress in a supporting role in a musical’).

A high-profile show to watch out for at this year’s festival is #HonestAmy, a hilarious one-woman ukulele comedy starring RBC graduate Amy Booth-Steele directed by well-known actor, director and writer Kathy Burke. The show has already been rated as one of the 12 best shows at Fringe by the Guardian.

Among the recent graduates to watch out for is Clement Charles who, since appearing at the 2018 festival in 26th ranked show ‘Kids Play’ when he was still studying, has spent the time since finishing his training at RBC in a production of ‘Romeo and Juliet’ in Dubrovnik. Clem is heading to Edinburgh Fringe once again to appear in ‘The Good Scout’ by Boys of the Empire Productions.

The Edinburgh Festival Fringe provides a major platform for both big name and emerging artists and collaborators from across the globe, and offers great exposure for new talent.

Follow us on social media using the hashtags #RBCatFringe and #RBCFamily to keep up to date with all the RBC students and graduates you can catch performing at the 2019 Edinburgh Festival fringe.

Just some of the RBC representation in the Edinburgh Festival Fringe programme this year includes: