Looking back at the year’s successes 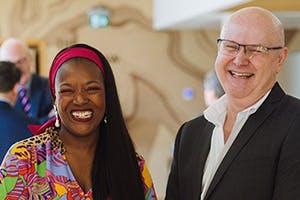 RBC’s Annual Prizegiving took place last week, giving staff and students the opportunity to reflect on and celebrate the years’ successes in both music and acting.

The RBC Honorary awards, such as fellowships and memberships, were also handed out at the end-of-year celebration on Friday 17 June.

The celebration event was also an opportunity to mark former Principal and Emeritus Professor of RBC Julian Lloyd Webber’s term of office at RBC, which was not previously possible due to the pandemic.

Unfortunately, last minute cancelled trains prevented Julian attending the event in person. However, there was a Zoom party attended by Vice-Chancellor Professor Philip Plowden and colleagues and friends of RBC.

The occasion saw a full-capacity audience enjoy performances from the RBC Symphony Orchestra, conducted by Daniele Rosina and Ludovic Morlot in the Bradshaw Hall – its largest orchestral concert since before the pandemic.

The concert highlighted the achievements of students and showcased works by composers associated with RBC, including BCU alumna of the year (2014) Charlotte Bray, alongside Janáček’s dramatically scored ‘Sinfonietta’.

A reception prior to the event was held in Julian’s honour in the Organ Studio, and a collection was held in support of the Nucleo Project, a project close to Julian’s heart, which champions the growth of young people and communities through music.

The concert was part of an extensive and exciting events programme being hosted up until November, marking the work being achieved in the University’s ambitious strategy.