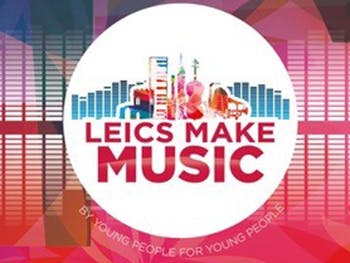 The Youth Festival will be held on Tuesday 14 July from 3pm, and will feature over 400 young musicians.

Students, staff and alumni of the Conservatoire have been involved in the project, which aims to support young musicians, music staff and friends of the Hub, and keep up the positivity in the music education sector.

BMus Music Technology alumnus and violinist, composer and producer Seth Bye will be headlining the event with a set consisting of violin and electronics.

Segun Akinola, another RBC alumni and composer for television and documentaries including the music for Doctor Who, has also judged the Soundtrack to Leicestershire composition. The competition, for 12 to 18 year olds, tasks entrants with creating a soundtrack for a short film of Leicestershire in any style, genre or instrument. The top three entries receive a two-hour masterclass with Segun and their compositions will feature as part of the festival.

RBC staff have also delivered online workshops and masterclasses as part of the run up to the festival, with Associate Head of Woodwind Dougie Mitchell hosting a session to help young musicians prepare their pieces for submission.

Additionally, RBC students, staff and alumni have been demonstrating their instrument or craft to encourage young people into music as part of Leics Get Involved. They have recorded videos for the project, which aims to engage with young people not currently accessing music provision, or young people who want to engage on a deeper level, as well as their parents or carers, schools and community musicians.

The Festival will be streamed on the Leicester-Shire Music Education Hub YouTube page.