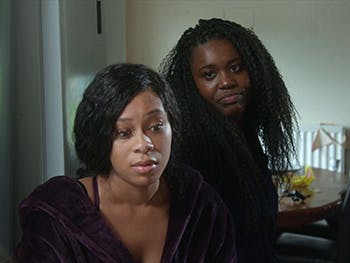 ‘The Tenancy’, featuring 2020 graduates Amber Jones, Kianyah Caesar-Downer, Nicole Brissett and Emily Anderson, has been nominated for Best Ensemble Cast at this year’s Birmingham Film Festival. The short film, directed by Senior Screen Acting Tutor and freelance TV director Clifford Milner, sees a Landlord pay a visit to her tenants, only to find she is missing some net curtains…

The Birmingham Film Festival provides a platform for new films and new talent to reach a wider audience and progress careers to the next level. The festival takes place 13 – 22 November and screenings take place at Millennium Point.

This comes after 'Hamster', written by 2018 BA Acting graduate Eric Mok, was officially selected to be screened by four International film festivals in Bern Switzerland, London, Toronto and Milan this year in the Best Comedy Short category, as well as the Out of the Can International Film Festival based in Derby.

‘Hamster’ follows Sam as she arrives home to find her Hamster has gone for a spin. But all is not as it seems. The short film was filmed in Birmingham and also directed by Clifford Milner, with casting by Head of Undergraduate Studies (Acting) Daniele Sanderson. It features 2020 BA Acting graduates Tomisin Ajani, Vivianne Sengati, Eleanor Jayne Homer and Jack Edwards.

These achievements follow on from screenings at international Film Festivals in 2019 for 'Breaking and Entering', written by RBC graduate Sasha Roberts, which received an Honourable Mention Certificate for Best Comedy Short at the Los Angeles TV Film and Script Festival and won the Best Comedy Short award at the Independent Film Awards Festival in London.